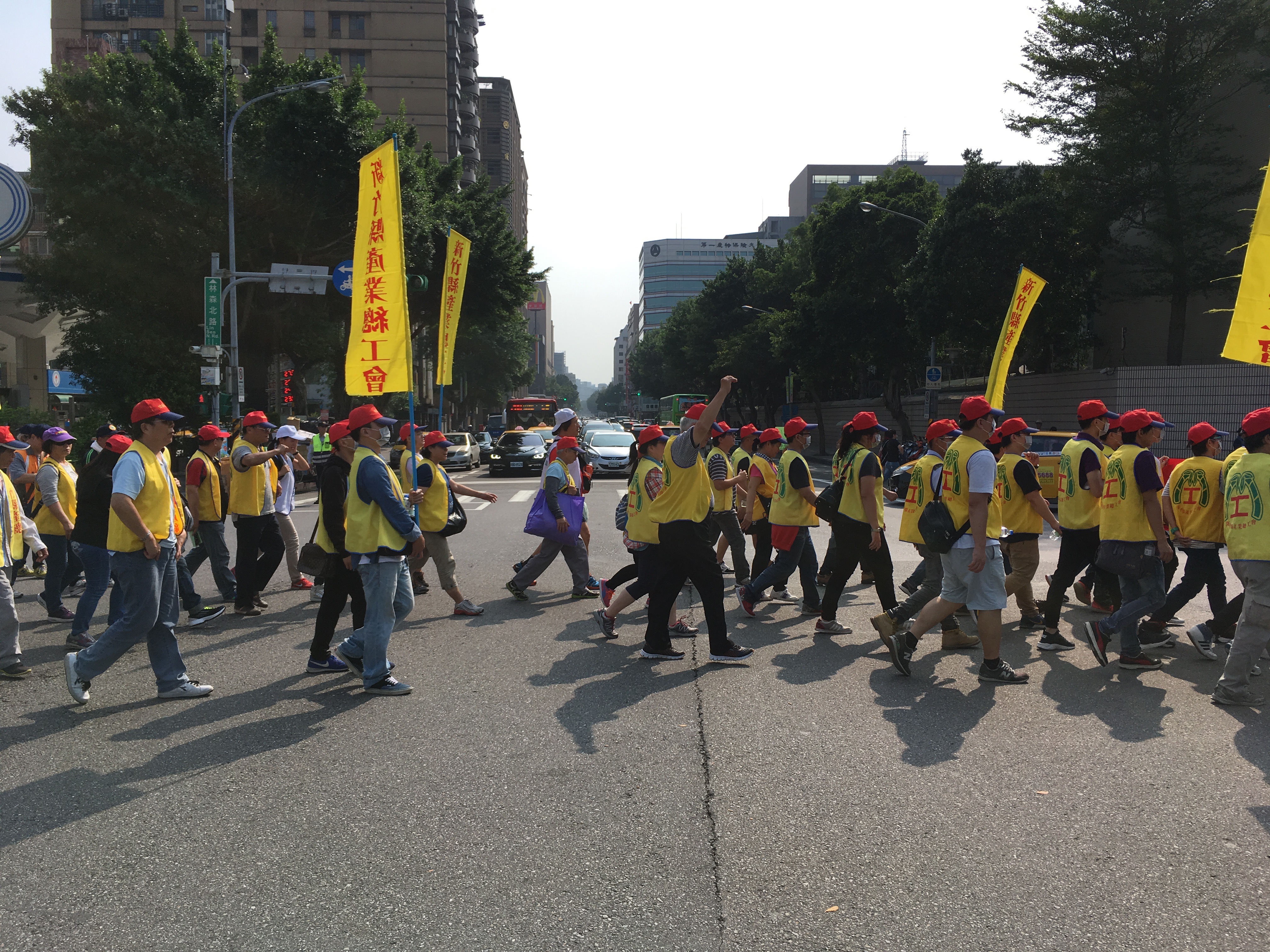 Subsequently followed a period of protestors being surrounded by police, which also numbered several hundred in number. With it remaining unknown as to the fate of those inside the Legislative Yuan, demonstrators then attempted to charge into the Legislative Yuan. This was not successful, but a number of protestors were injured, with reports of face, arm, hand, nose, and foot injuries. Two required hospitalization. When an ambulance arrived, protestors attempted to leave the area surrounded by police, with the stated intent of checking on the injured. When police refused to let protestors out of their encirclement this led to further clashes with riot police. Protestors eventually broke through and, seeing as occupying the Legislative Yuan seemed impossible, they disbanded, vowing for future actions to take place in November.

WORKERS WERE demonstrating against the planned removal of seven public holidays by the Tsai administration. This has been a hotbed issue for Taiwanese labor since before 2016 elections, with demonstrations mostly fronted by the Worker’s Struggle (工鬥) labor group. Previous demonstrations against public holidays cuts included a hunger strike, an attempt to occupy the Ministry of Labor, and a surprise demonstration outside of Tsai Ing-Wen’s private residence.

Taiwanese workers already work some of the highest hours in the world. Workers in Taipei averaged over 2,104 annual working hours in 2015. This means that, as a country, Taiwan ranks as having the fourth longest working hours in the world. But with planned cuts to public holidays, the Tsai administration would seek to reduce the amount of holidays enjoyed by Taiwanese workers nonetheless. 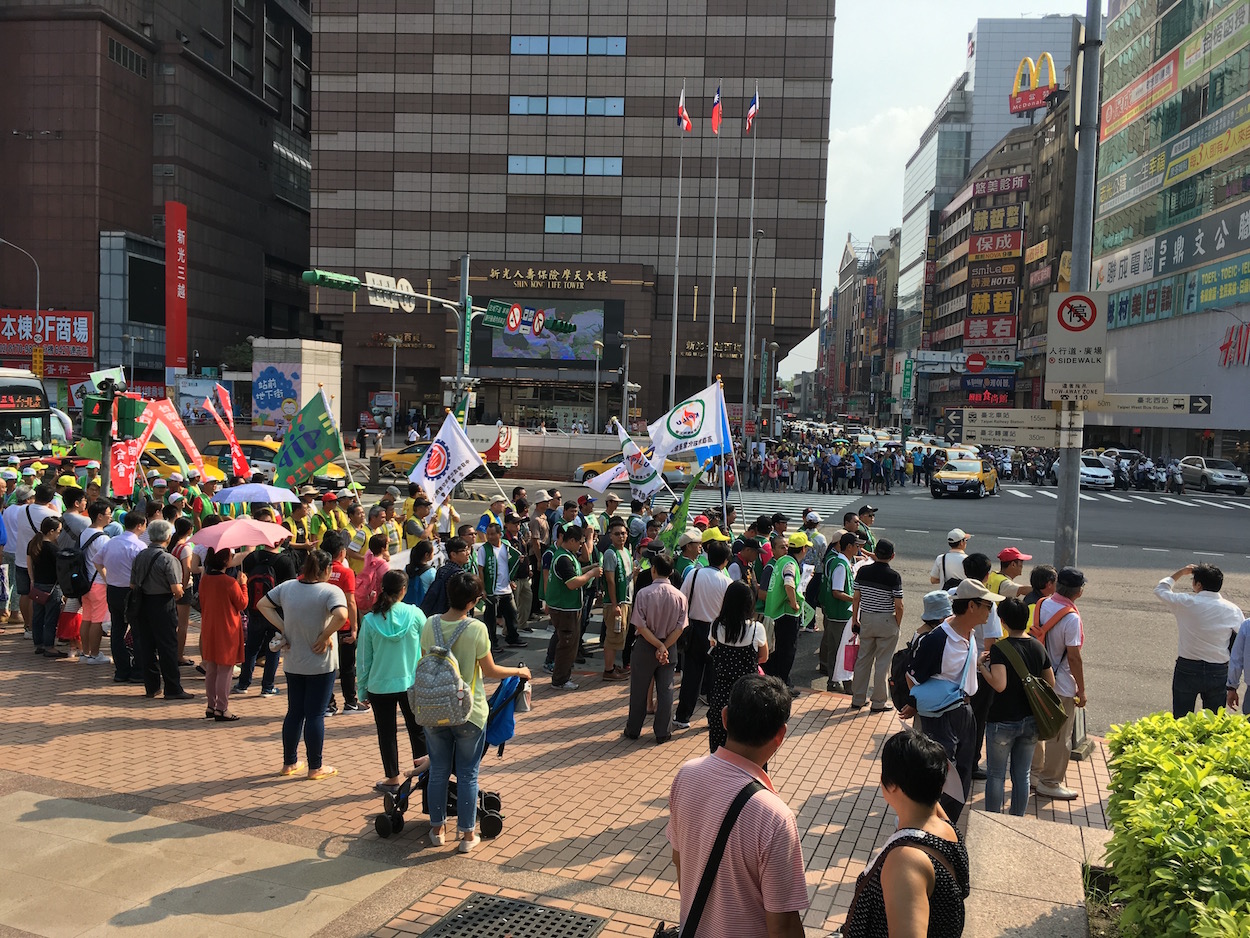 After past demonstrations by labor groups, the Tsai administration backed down from its plan, suggesting that it may be open to the demands of labor group. This would be in allowing for two set rest days for workers rather than one set rest day and one “flexible rest day,” during which workers could still be made to work overtime, and the restoration of cut holidays. 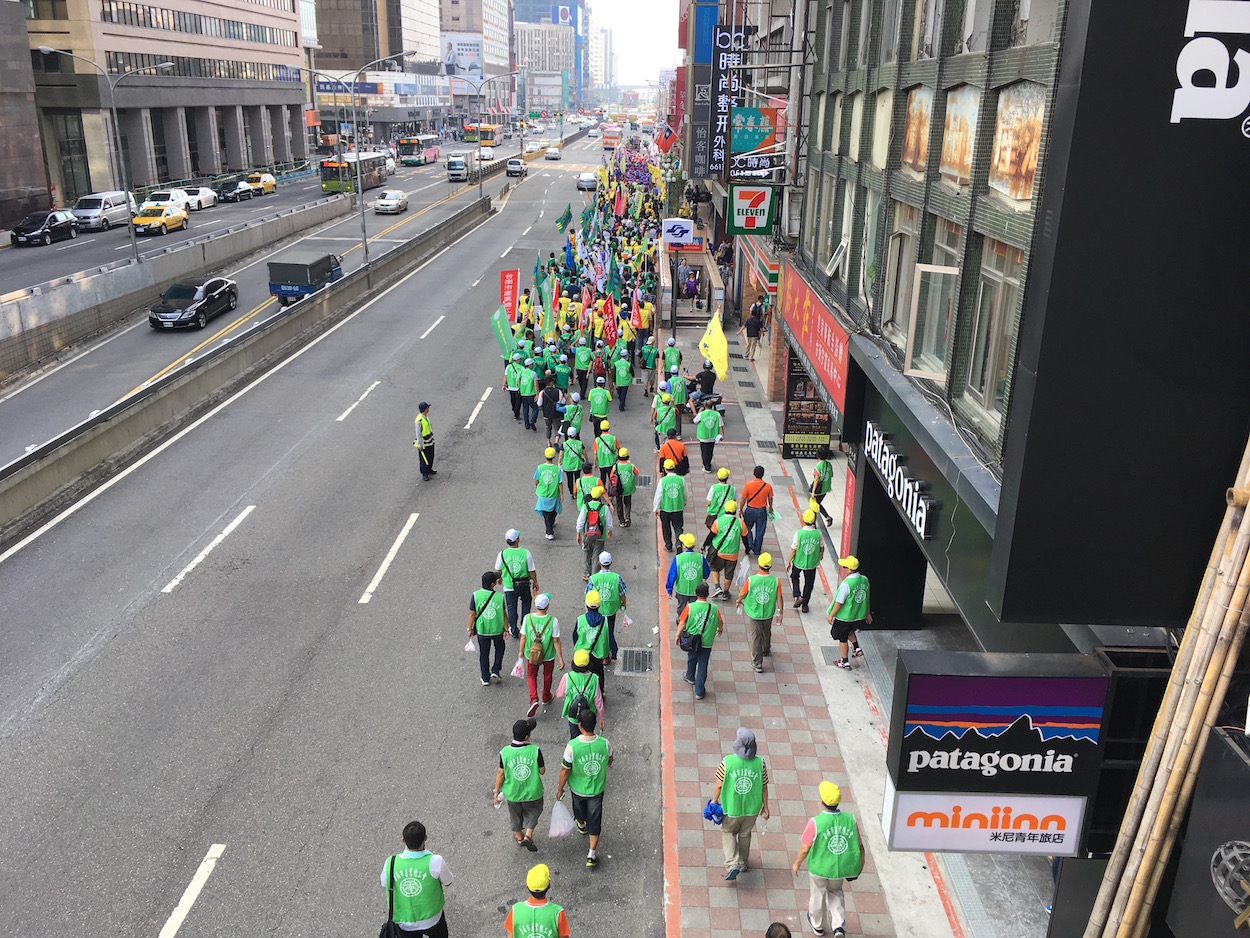 But it is still surprising that the Tsai administration did not try to placate labor by granting them one demand or another and instead took a hard line against labor, claiming that it could no longer continue with a policy of trying to placate any and all interest groups which made political demands of it. Of course, labor is far from just another interest group, seeing as planned changes to labor laws stand to affect all working members of Taiwanese society, and the Tsai administration stands to alienate a large sector of society through siding with big business. Indeed, during today’s demonstration, organizers attributed the declining approval rating of the Tsai administration to its poor handling of labor issues. 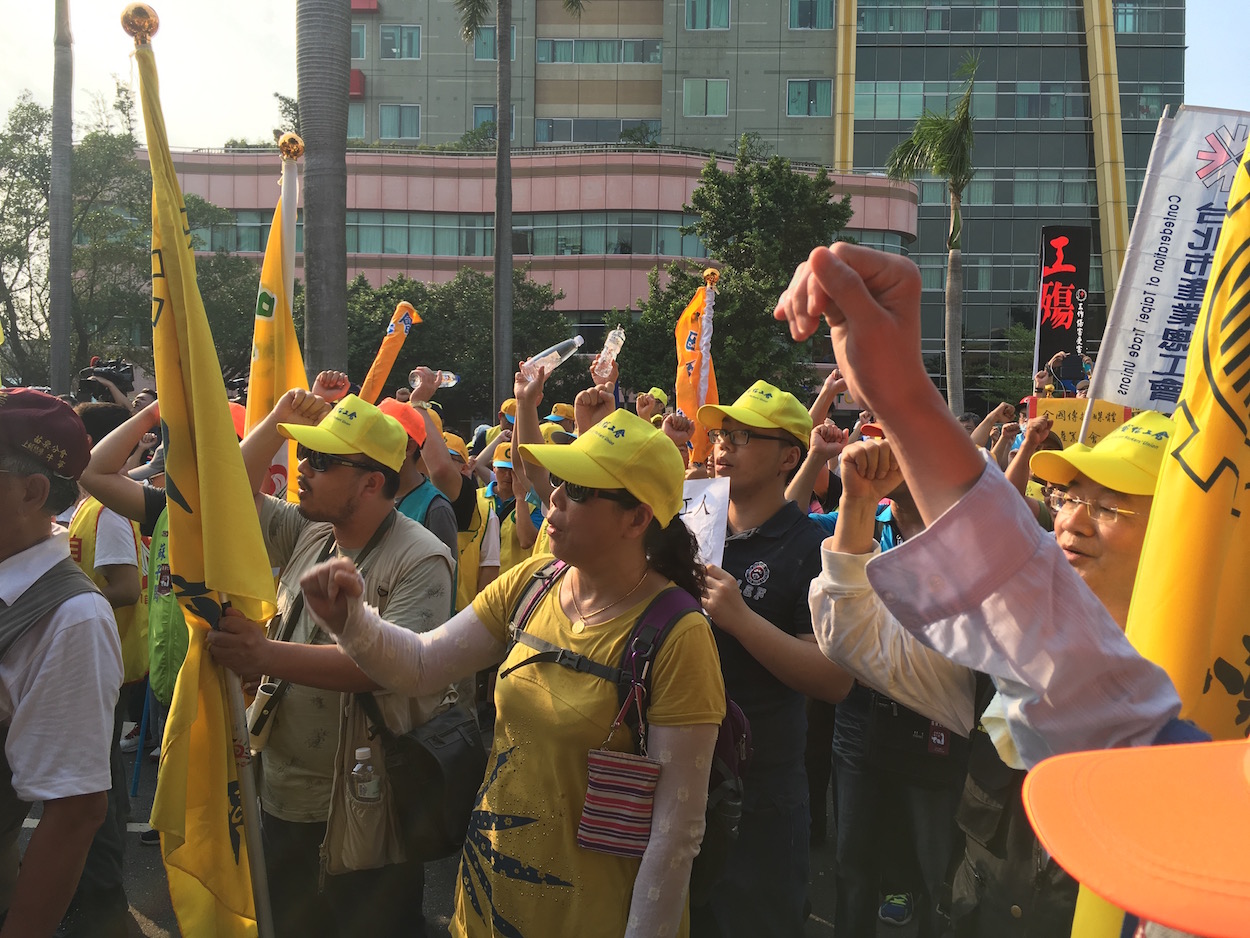 What was particularly enraging was the undemocratic means used by the Tsai administration to force through labor changes. The amendment to the Labor Standards Act was passed in under seventeen minutes, with the review of the act declared complete in under two minutes by Chen Ying, the DPP head of the Social Welfare and Environmental Hygiene Committee. This was accomplished by mobilizing members of the DPP to occupy five conference rooms ahead of time, changing the site of the meeting from its original location at the last minute, and only announcing the site of the new meeting at the last minute. Despite New Power Party (NPP) and KMT legislators rushing over to the new meeting site and members of the NPP attempting to propose changes to the meeting, the bill was passed. The bill still needs to be reviewed on the floor of the Legislative Yuan and not just through a committee, however, to take effect.

Such actions by the DPP are, of course, highly reminiscent of the KMT’s “black box” means of undemocratically forcing through of the CSSTA in March 2014, the event which prompted the Sunflower Movement occupation of the Legislative Yuan. Unsurprisingly, during today’s protests, it was a frequent refrain for organizers to state that the DPP’s actions in power were no different than the KMT’s. 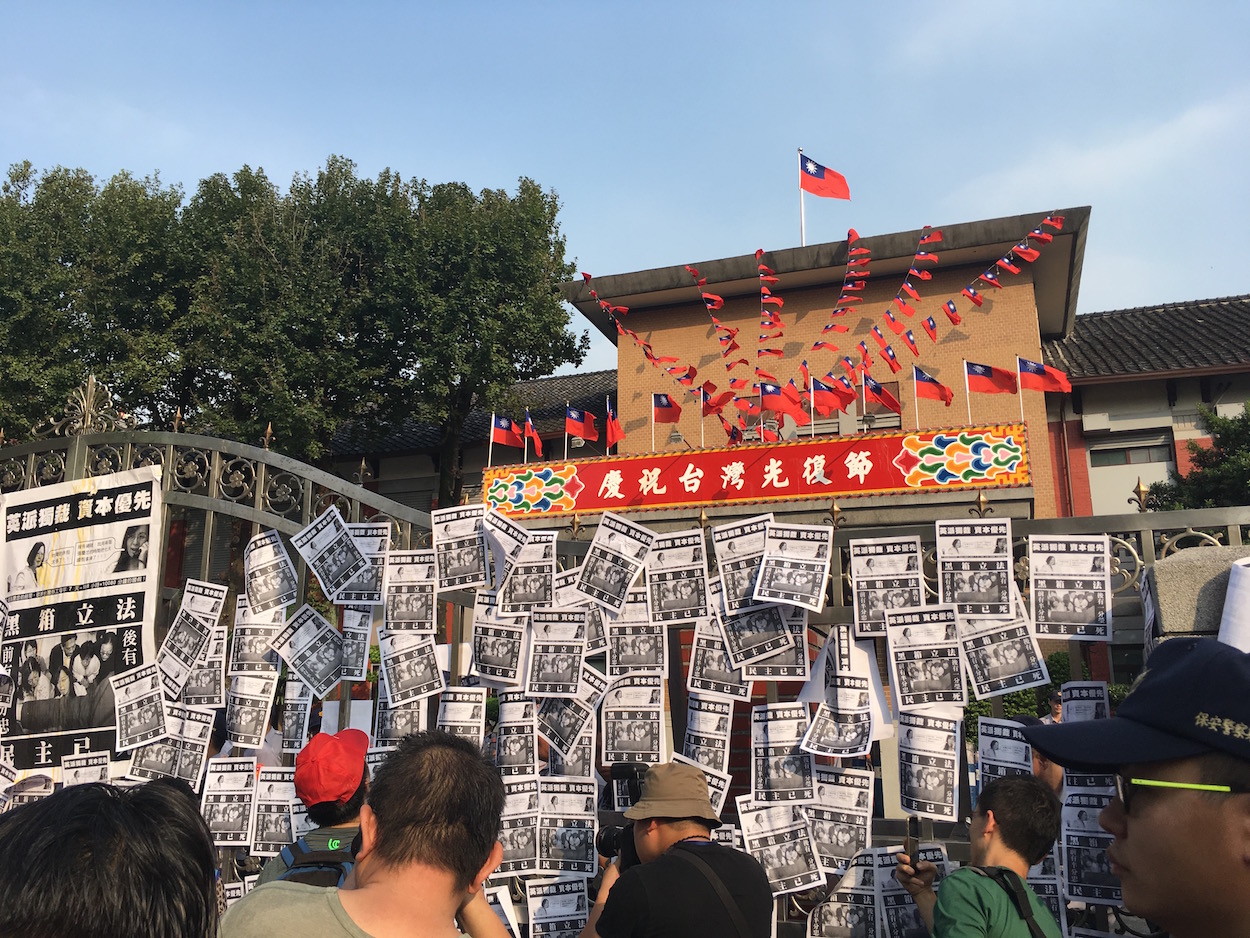 The three demands of demonstrators was for a repeal of the undemocratic process by which changes to labor law were passed, open meetings discussion the issue in the future, and no less than 123 days off for Taiwanese workers per year, given how much Taiwanese workers already work per year. But noticeably, organizers of the demonstration today focused on the issue of planned holiday cuts, with little discussion of previous contention over set rest days and “flexible rest days.” This may reflect an attempt by organized labor to compromise with the Tsai administration by lessening their demands, in spite of the Tsai administration’s own lack of compromise.

Participants In The Demonstration 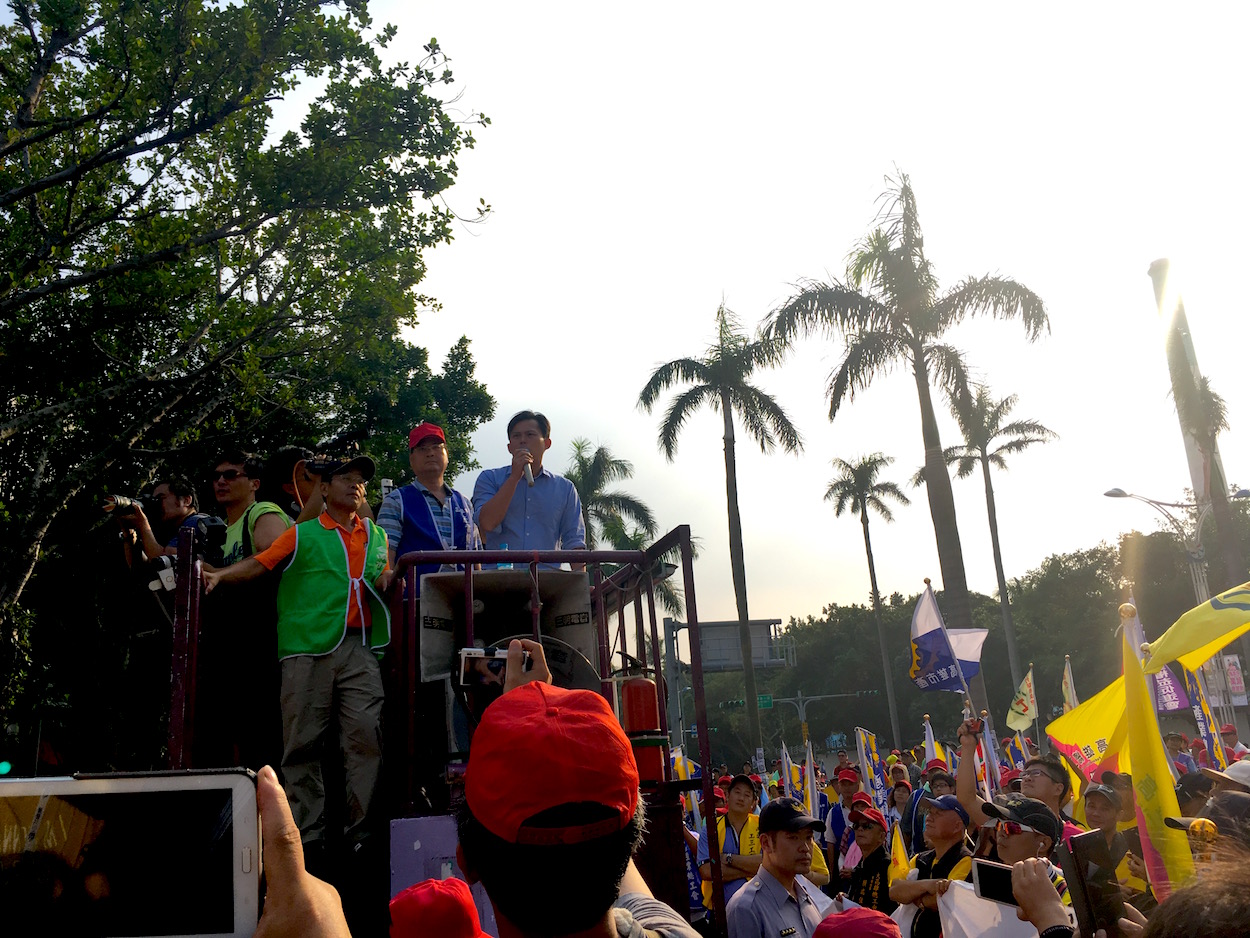 Of “Third Force” political parties, members of the Social Democratic Party and Green Party were also in attendance, including Fan Yun of the Social Democratic Party. Huang Kuo-Chang of the NPP, himself a former Sunflower Movement leader, gave a speech criticizing the Tsai administration’s actions as using “black box” means to force through labor policy and vowing that the NPP would do all it could to annul the illegitimate process which led to labor changes being passed. This led to members of the crowd cheering on the NPP.

Other speakers included a KMT contingent, which included KMT legislators Johnny Chiang and Chiang Wan-An, and Lee Yen-hsiu. Notably, Johnny Chiang and Chiang Wan-An, who are father and son, are respectively the grandson and great-grandson of Chiang Kai-Shek. Representatives of the People First Party (PFP) were also slated to speak, but seeing as they would only arrive one hour later than any other speakers, the impatience of demonstrators to get on with throwing eggs at the Legislative Yuan led to any speeches by PFP members being canceled. 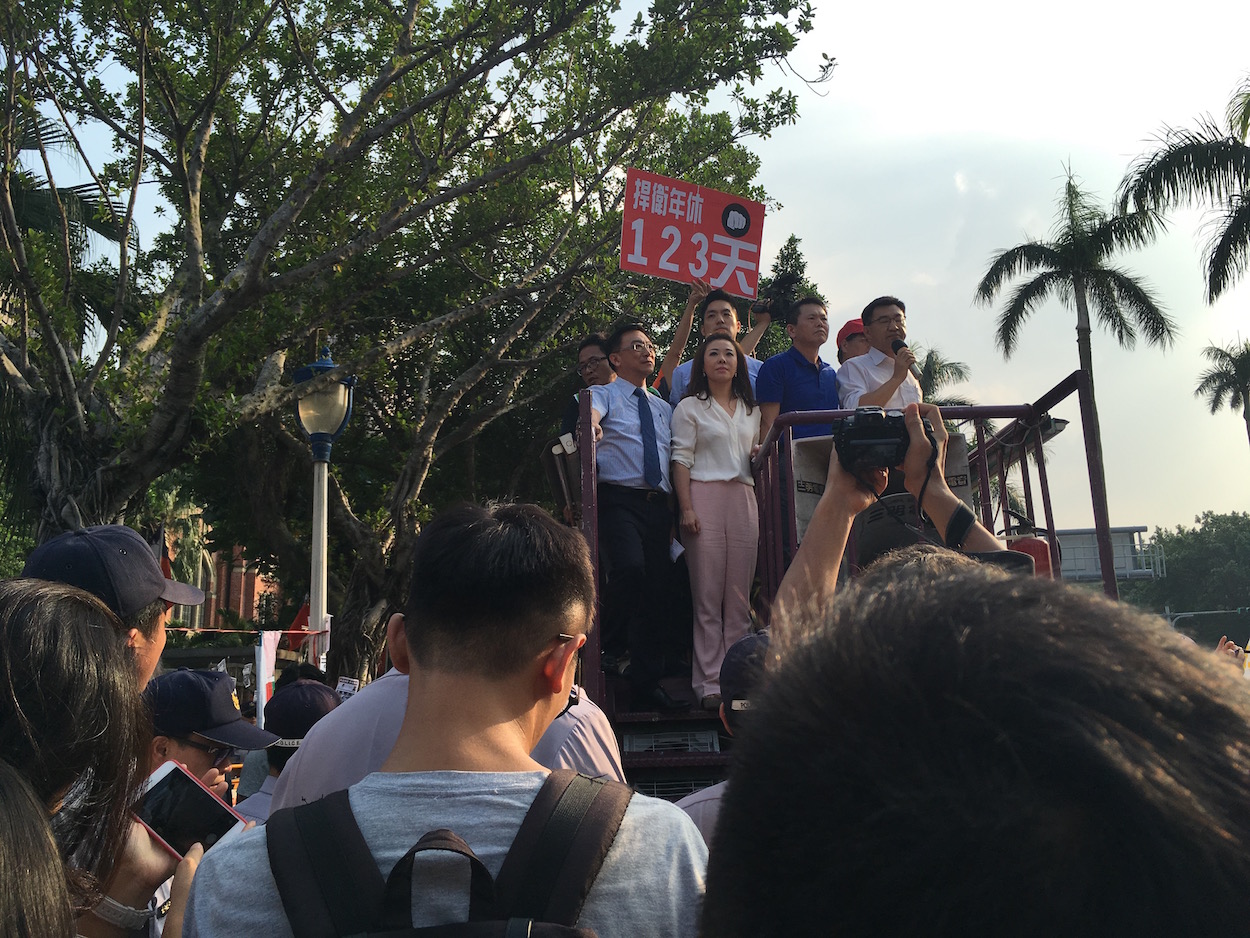 One can allay the charge of Worker’s Struggle organizers trying too much to be bipartisan in allowing members of the KMT to speak, despite anti-KMT sentiment sometimes slipping into their speeches. Although it is to be noted that some members of the crowd did in fact cheer on the KMT, the KMT and pan-Blue camp traditionally has been disdainful of Taiwanese labor. But finding itself in the role of a political opposition for the first time in the party’s history, it would be the party is making attempts to reach out to Taiwanese labor. Hence recent efforts by the KMT opportunistically latch onto Taiwanese labor issues. 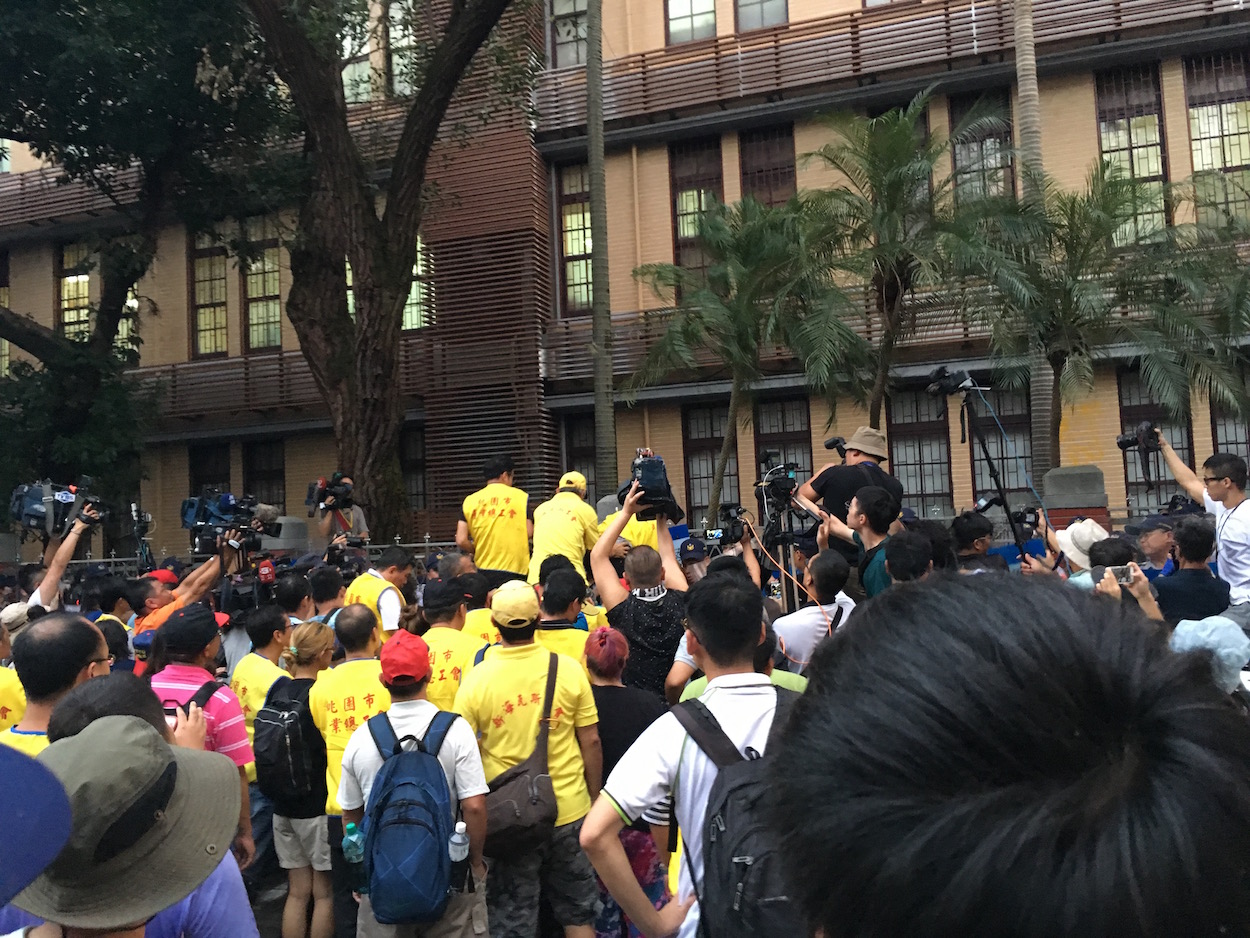 Past months have seen an uptick in labor activity, the historic China Airlines strike having demonstrated the effectiveness of strikes to Taiwanese youth activists who had previously not taken a substantial interest in labor issues. But today’s demonstration could have drawn in more members of Taiwanese youth activism. It may require further outreach by labor groups for Taiwanese activists to participate en masse in future actions, as they did during the China Airlines strike. 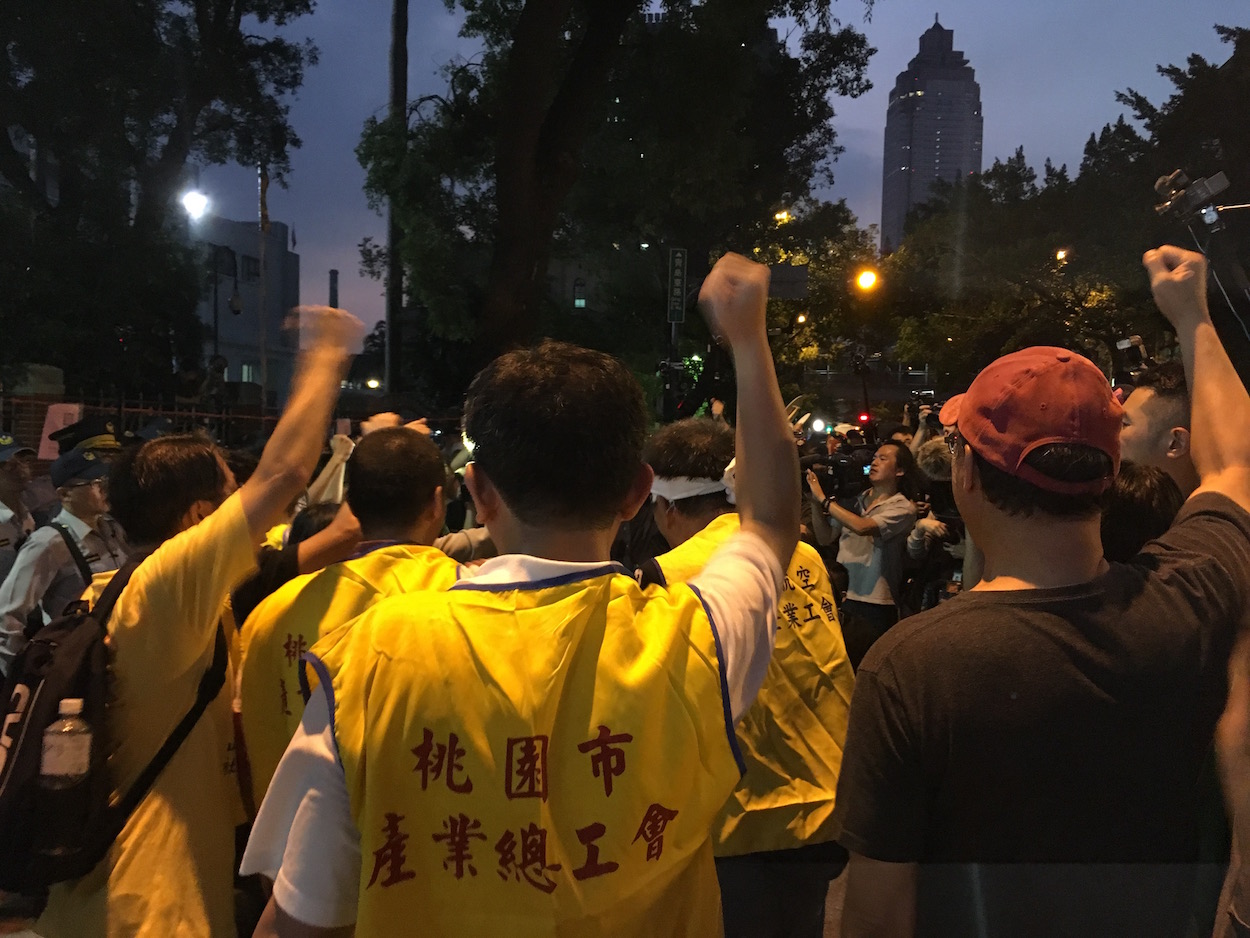 The end of the demonstration. Photo credit: Brian Hioe