Phony Attempts By The KMT To Protest The Party Assets Issue?

IF AS OF LATE, the KMT has been demonstrating the fact that the DPP’s investigation into its party assets has led to an inability for it to pay party workers, this merely reflects to what degree the KMT is reliant on illegally obtained party assets to maintain the functioning of the party. Namely, the KMT is trying to create the perception that through passing legislation aimed at tackling the KMT’s party assets, the DPP is carrying out the political persecution of the KMT. But if the KMT genuinely cannot pay its workers after a freeze on party assets under investigation, this means that the majority of its assets were probably illegally obtained to begin with, never mind that the KMT claims that the majority of its party assets have already been disposed of.

If KMT party assets are not as high as they once were, it also remains to be clarified as to what led to a decline in the KMT’s total amount of assets. It seems to opaque even within the party as to the KMT’s total amount of assets. Only high ranking members seem to know the whole truth, seeing as members of the KMT have contested the amount of total party assets in the past. Some have suggested that there is tension within the KMT between lower ranked members and the party leadership because only the party leadership has access to party resources and it monopolizes access to party resources in order to retain control over the party as a whole. KMT party assets may actually be one reason that the KMT has not yet politically disintegrated, seeing as members of the KMT do not want to let renounce their stake to the KMT’s party assets if they leave the party.

Thus, the KMT’s claim that it cannot pay its workers because of the DPP’s freeze on its party assets seems to be a superficial one, made merely to criticize the DPP. As members of the government-appointed task force investigating KMT party assets have stated, if the KMT genuinely cannot pay its workers, that is a labor issue which KMT workers should take to management, or perhaps organize in unions to demonstrate. Indeed, while demonstrating KMT workers have phrased the issue as a labor issue, it may be that the KMT is hoping to capitalize off of the recent spate of labor demonstrations which have taken place in Taiwan, in order to lend what are at heart attempts to attack the DPP the veneer of a progressive political cause. 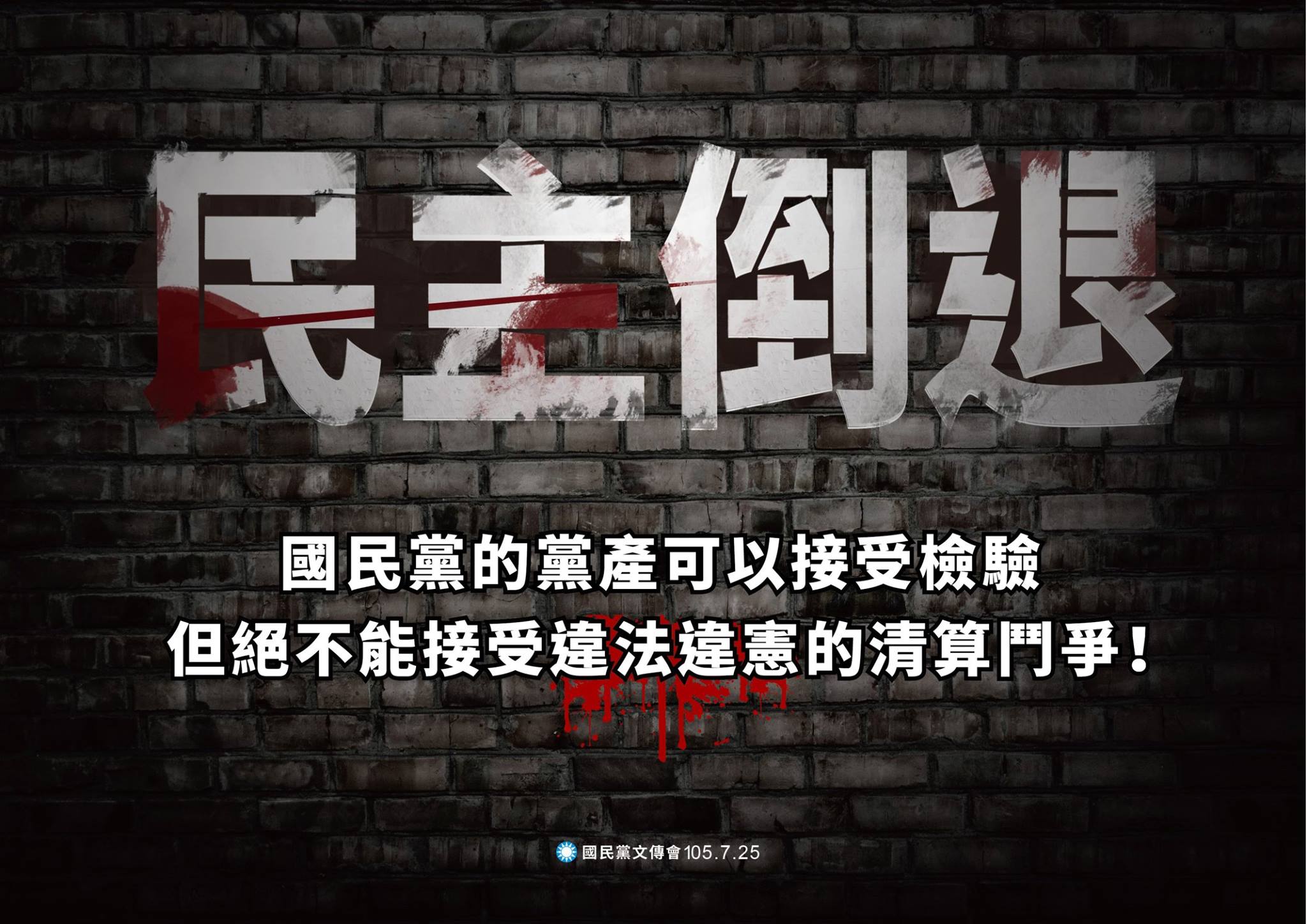 And if members of the KMT have made the claim that the DPP merely wants to get its hand on party assets for itself, KMT party assets seized from it will not become the property of the DPP, but the Taiwanese government. Notably, the government task force appointed to investigate KMT party assets does not only consist of DPP members, but includes former KMT, including those who were precisely expelled from the party for criticizing the party leadership’s handling of the party assets issue, such as former party spokesman Yang Wei-Chung.

The party assets issue does not look like it will go away anytime soon. If the KMT has made this into a central point of its attempts to create the perception that the DPP is carrying out a campaign of political persecution against it, this would be because, along with transitional justice legislation, the issue of KMT party assets points quite directly at the past crimes of the KMT during the authoritarian period. But no amount of stalling by the KMT can avoid the issue.