PROTESTS IN VIETNAM against fish die-offs caused by Taiwan-owned Formosa Steel and the attempts of the Vietnamese government to cover up for Formosa Steel continue, with over 10,000 reportedly having demonstrated against the company on October 2nd. Some believe that protests could now directly target the central government. These demonstrations are certainly the largest outbreak of a social protest seen in Vietnam in some time, given that the Vietnamese government normally cracks down on popular protest. Yet it is ironic that there continues to be a lack of discussion in Taiwan regarding the actions of a Taiwanese-owned company.

Millions of fish began washing up on Vietnamese shores in April, with fishing villages being entirely unable to fish and fish washing up across 200 kilometers of shore, a distance stretching four provinces across the central shore of Vietnam. Some have cited this as being Vietnam’s largest ecological disaster in decades. The culprit pointed to by demonstrators was the Taiwanese-owned company Formosa Steel, seeing as fish die-offs began after the construction of a mile-long pipe traced back to a steel mill owned by Formosa Steel. Formosa Steel is owned by Formosa Plastics, Taiwan’s largest producer of plastics materials. Given Formosa Plastic’s long history of environmental wrongdoing in Taiwan, Cambodia, America, and elsewhere, this would not be surprising.

To begin with, Formosa Plastic Group’s long history of environmental crimes has been a matter of protest in Taiwan itself. During the period of Chiang Ching-Kuo’s rule as dictator, Formosa Plastics’ construction of the No. 6 Naptha Cracker in collusion with the KMT developmentalist state provoked mass outrage, leading to a protest of 20,000 against a proposed chemical complex by Formosa Plastics in December 1990—this being a landmark protest in Taiwan’s transition from authoritarian rule to democracy. Since then, over 169 illegal dumping sites, including more than 8,000 tons of mercury waste, have been linked to Formosa Plastics in Taiwan.

As an international corporation with plants located across the world, industrial accidents by Formosa Plastics-owned plants have also occurred in America, with five employees in Illinois killed after an chemical plant explosion and 11 workers injured after an explosion at a Texas chemical plant. But Formosa Plastics’ longer history of illegal dumping is also evidenced in its dumping of 3,000 tons of mercury waste in Sinhanoukville, Cambodia in 1999 through bribery of government officials, an action which led to the deaths of three villagers. After eventually removing the waste through contracting with the Cambodian army, Formosa Plastics first tried to ship this waste to dispose of it in California and then in Nevada. 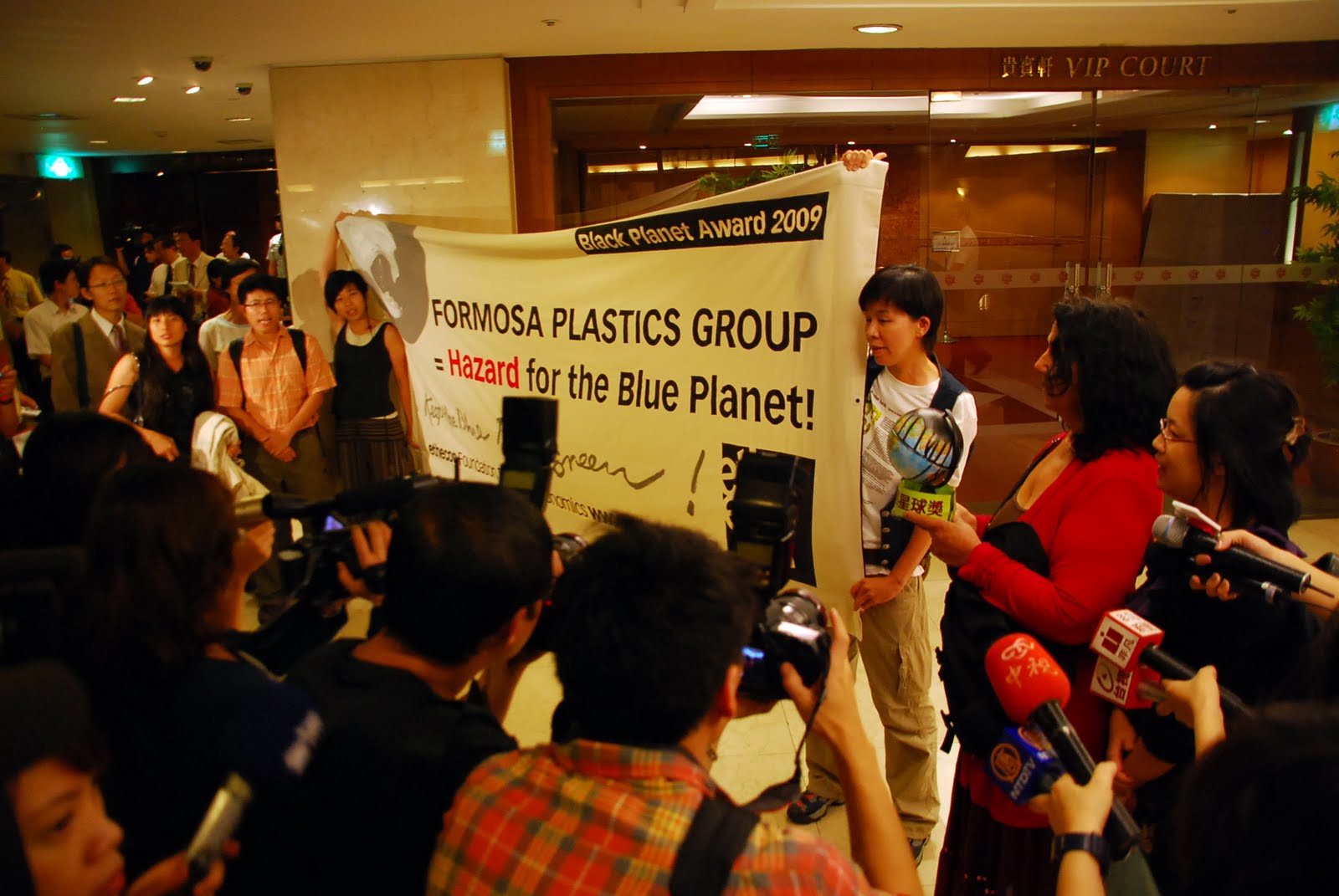 2009 demonstration against Formosa Plastics outside a shareholder’s meeting by members of the Taiwanese Green party along with Diane Wilson, co-founder of American activist organization Codepink. Photo credit: Save The Taiwanese White Dolphin

Formosa Plastics has also been charged with illegal pollution in Delaware, Louisiana, and Texas, leading the EPA to issue a $13 million fine to Formosa Plastics for environmental damage in Point Comfort, Texas and Baton Rouge, Louisiana in 2009. A 2009 report released by Texas A&M indicated genetic damage in cattle as far as six miles away from Formosa’s chemical plant in Point Comfort, where workers have also dealt with concerns of brain cancer and cases of neurological damage for decades. In 2009, Formosa Plastics would be issued the “Black Planet Award for destructive environmental and economic practices causing wreckage, havoc, and death” by German environmental NGO Ethecon.

Formosa Plastics has filed lawsuits against Taiwanese critics in the past, hoping to silence them. An incident in recent memory would be Taiwanese academic Ben-Jei Tsuang of National Chung Hsing University being sued by Formosa Plastics for accusing the plant of causing increased cancer risk in the vicinity of a hydrocarbon-processing facility in Mailiao, Taiwan. After Tsuang was sued for defamation by Formosa Plastics, over 1,000 academics worldwide would rally in defense with a petition on Tsuang’s behalf. Signatories included Nobel laureate Lee Yuan Tseh, whose Nobel Peace Prize was in the field of chemistry.

Thus, overall, it is surprising that there is such defensiveness of Formosa Steel and Formosa Plastics Group in Taiwan. Even now, Formosa Plastics is refusing to close down a Changhua power plant which the local government is trying to shut down for excessive pollution. And in Vietnam, Formosa Steel’s environmental wrongdoings have only continued after the fish die-offs. Formosa Steel was later caught dumping in several illegal dumpsites and is suspected of shipping toxic waste to the sea around Quang Binh and dumping it into the ocean in weighted bags.

It is surprising that there have been few responses from the Tsai administration to date about the fish die-offs. Given the massive blowback against a Taiwanese-owned company, these events seem to put at risk Tsai Ing-Wen’s New Southwards Policy aimed at building stronger political and economic ties between Taiwan and Southeast Asian countries in order to wean Taiwan off of economic overreliance on China. Vietnam would certainly be one of the countries that Tsai would seek to build closer ties with as part of the New Southwards Policy.

Incidents as the Formosa Steel fish die-offs lead Taiwan to appear no different from China in acting as an economic exploiter of Southeast Asian countries, seemingly undermining the notion of the New Southwards Policy. Nevertheless, one suspects that Tsai’s general silence on the matter may be because she is unwilling to offend the ruling Vietnamese government, a potential ally against China—never mind that this means siding with an authoritarian government over the people of Vietnam. 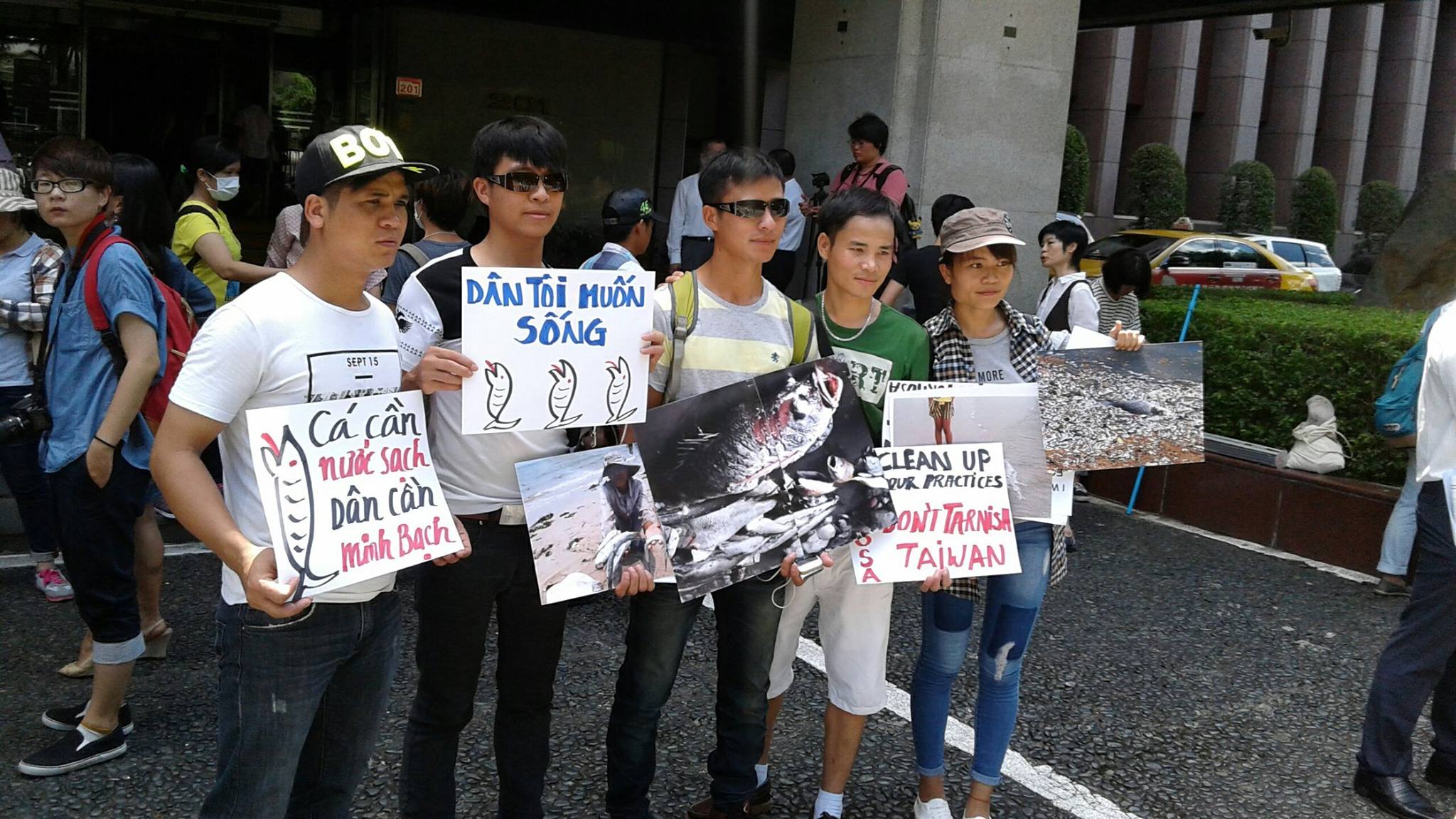 DPP legislator Su Chih-feng would visit Vietnam in early August to inspect the Formosa Steel plant thought to be the cause of fish deaths. Indeed, as demonstrative of the attempts of the Vietnamese government to defend Formosa Steel, Vietnamese authorities attempted to prevent Su from visiting the factory by detaining her at the airport, though Su eventually made her way into the country. Yet notwithstanding several small protests in Taipei, for the most part, there is continued silence from either the Tsai administration or Taiwanese youth activists on this issue.

Recent protests have been sparked by the fact that the Vietnamese government announced that the repayment plan for Formosa Steel would only last six months. The repayment amount is also lower than expected. Once again, this is a sign of the Vietnamese government attempting to defend Formosa Steel, also evidenced in that it attempted to exclude NGOs from the process of handling the disaster, and by the fact that it has deployed its media propagandists to try and smear protesters. As befits the logic of a party-state, Vietnam being ruled by the Vietnamese Communist Party, government apologists have also accused protesters of being guided by foreign, subversive elements seeking to undermine the government. But the saga of Formosa Steel is ongoing, and as of yet, there still have not been significant responses from Taiwan.