WITH THE BLOCKADE of Wukan village by 2,000 police officers and use of violence against townspeople, including the firing of plastic bullets into a crowd, it would be that China’s Wukan village is once again under siege. Videos of police violence against Wukan townspeople have circulated on Sinophone social media in past days, even if there is a lack of reporting on the incident from state-run media in China.

Wukan village has a population of 15,000 and has in recent years garnered attention as an example of grassroots democracy at work in China, with villagers beginning to organize in 2011 against land seizures by the government that villagers alleged to be illegal. This was the result of the government seizing land and selling it for commercial use but underpaying those whom the land had been seized from. Villagers were demonstrating against what they saw as a breakdown in the democratic structures of governance of the village, members of the village committee illegally staying in power by refusing to allow for competitors in elections. Local village representatives are elected in China democratically despite the lack of elections at higher levels of government.

The “Wukan Siege” which took place in the fall of 2011 was viewed as an extraordinary example of protest in China, because of demonstrations that lasted over six months and which involved thousands of villagers. Villagers alleged that local leaders had sold 60% of the village’s 11 mile territory over the course of eighteen years illegally without the approval of villagers, and demonstrated against further land grabs. Hotels, homes, factories, a power company, and pig farms were among what were built on seized land. Land seizures of this sort occur in China with corrupt officials working together with development companies to sell land to line their pockets with the proceeds of lucrative land sales, or attempting to make up budget shortfalls with the proceeds. Sometimes elements of organized crime are employed as enforcers.

Organizing that led up to the “Wukan Siege” began with young people, who organized through social media platforms as WeChat and the use of blogs. The protest movement originally began with a petition campaign, but actions escalated after this proved ineffective, with villagers attacking government and police buildings. During the “Wukan Siege”, the village was surrounded by hundreds of police, cut off from food and water, and villagers feared that the village would be eventually massacred en masse by police. Wukan villagers were at times reliant on international and Hong Kong media to get the message out about their uprising, in light of lack of coverage from media outlets from within China. Probably to avoid being overly provocative of the government, demonstrations have used the language of patriotism and made appeals to the central government to correct the actions of local officials, however. 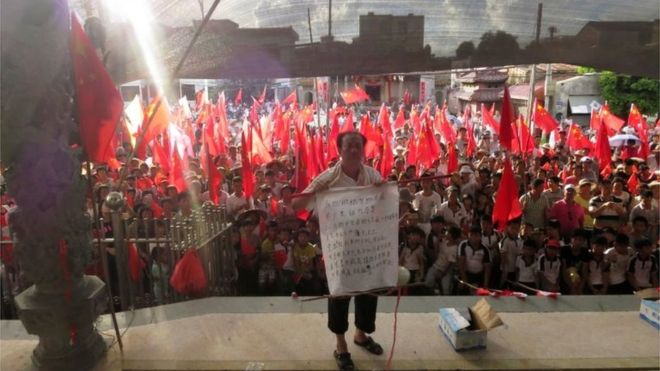 The eventual backing down of the government to allow for negotiation with villagers was seen by observers of China as potentially marking something new for grassroots democracy. This was one of the rare cases in which the Chinese government backed down in the face of popular protest in order to negotiate and this was hailed as the “Wukan Model” of conflict resolution. Some also hailed Wukan as a radical democratic experiment in otherwise undemocratic China, perhaps pointing to future possibilities for democratization in China.

But such optimism may have been misguided. As present events demonstrate, the state comes in with force when it sees events as having grown out of its control. The present siege of Wukan is said by villagers to surpass the 2011 “Wukan Siege” in violence and scale. In particular with the amount of media attention devoted to Wukan by Hong Kong and western media, the Chinese government may wish to prevent Wukan from being inspiring for future uprisings.

What villagers are currently demonstrating is the arrest of village head Lin Zuluan, one of the leaders of 2011 protests, on graft charges. After the success of the 2011 demonstrations, a number of protest leaders were elected as village representatives in Wukan. This includes Lin, as well as Xue Jianwan, daughter of the deceased protest leader Xue Jibo, whose death some suspect to have been the product of foul play seeing as his body was reportedly covered in wounds despite claims by police he died of cardiac failure while in police custody.

Consequently, Wukan townspeople have been demonstrating not only for Lin’s release, but the resolution of land issues which are in fact still unresolved since 2011. Despite the election of officials who were leaders of the movement, since 2011, land grabs have not been fully reversed and some of the newly elected officials proved to be as corrupt as their predecessors. But if Chinese authorities have suggested that Lin is no different from his corrupt predecessors as well, townspeople do not believe this, hence the current spate of demonstrations. Demonstrations of several thousand strong began in June, but if we are currently seeing a repeat of the 2011 Wukan Siege, there has been much escalation since then.

With accusations of graft against Lin Zuluan, we can see the true face of Xi Jinping’s present anti-corruption campaign—hardly a genuine attempt to root out deep-rooted corruption in the Chinese party-state, but more often than not an attempt to consolidate political control. This at times includes purging genuine reformers from government and reinstating corrupt officials because of fears that reformers could be a threat to established authority and be too disturbing of the current capitalist social order of China. Perhaps with the Chinese government acting to eliminate reformers and defend corrupt officials, this returns is to the Chinese government acting in the interests of capital and seeking to put down what it perceives as threats to its ability to preserve present social relations of capitalist exploitation in China.

What is now, then, for Wukan going forward? The situation is a tenuous one. Though unlikely, it is not impossible that villagers do, in fact, face the threat of simply being massacred en masse by the government and then the government covering this up as best as it could—though one suspects that this kind of overreaction would lead to profound backlash against the Chinese government from other places in China. And can it be that the present, continued resistance in Wukan can be inspiring of other similar uprisings in other places in China? That remains to be seen.