PROTESTS IN VIETNAM continue regarding Taiwanese-owned company Formosa Ha Tinh Steel. Formosa Steel was forced to a pay $500 million fine for its role in contamination which led to millions of dead fish washing up some 200 kilometers of shore in Vietnam—a distance stretching four provinces. This led to mass protests in Vietnam, which is rare, given that the Vietnamese government normally cracks down on protest except when it is useful to its purposes. Some believe this to be the largest ecological disaster in Vietnamese history.

But Formosa Steel has continued to be caught up in scandal, with Formosa Steel having been caught involved in several illegal dumpsites and being suspected of shipping toxic waste to the sea around Quang Binh and dumping it into the ocean in weighted bags. Formosa Steel had previously been an object scandal in Vietnam in 2015 after a scaffolding collapse at the plant construction site caused the deaths of 16 workers, apparently because of lack of adequate safety measures. Yet even after the mass fish deaths which provoked outrage across all of Vietnam, it seems that Formosa Steel has not learnt its lesson.

DPP legislator Su Chih-feng would visit Vietnam in early August to inspect the Formosa Steel plant thought to be the cause of fish deaths. Apart from concerns with the issue as a human rights violation committed by a Taiwanese company, Su would raise that mass fish deaths could damage Taiwan’s relation with Vietnam, putting at risk Tsai Ing-Wen’s New Southwards policy aimed at building stronger political and economic ties between Taiwan and Southeast Asian countries in order to wean Taiwan off of economic overreliance on China. Indeed, Taiwan is usually not distinguished from China within Vietnam, and incidents as the mass fish deaths lead Taiwan to appear no different from China in acting as an economic exploiter of Southeast Asian countries.

Yet it is thus ironic that some in Taiwan have attempted to defend Formosa Steel from charges of wrongdoing, or even to claim that the Vietnamese government offered up Formosa Steel as a scapegoat to the public. Some have even claimed that the $500 million fine paid by Formosa Steel was a product of Formosa Steel president Chen Yuan-cheng not being allowed to leave Vietnam until the fine was agreed to pay to, much in the way that a hostage might not be allowed to leave until agreeing to pay a ransom. But why such defensiveness of Formosa? To begin with, the Formosa Plastics Group which owns Formosa Steel hardly has a great environmental record in Taiwan, with recent issues of environmental pollution regarding a coal power plant owned by Formosa Plastics in Changhua and controversy around pollution caused by its Naptha crackers for decades. 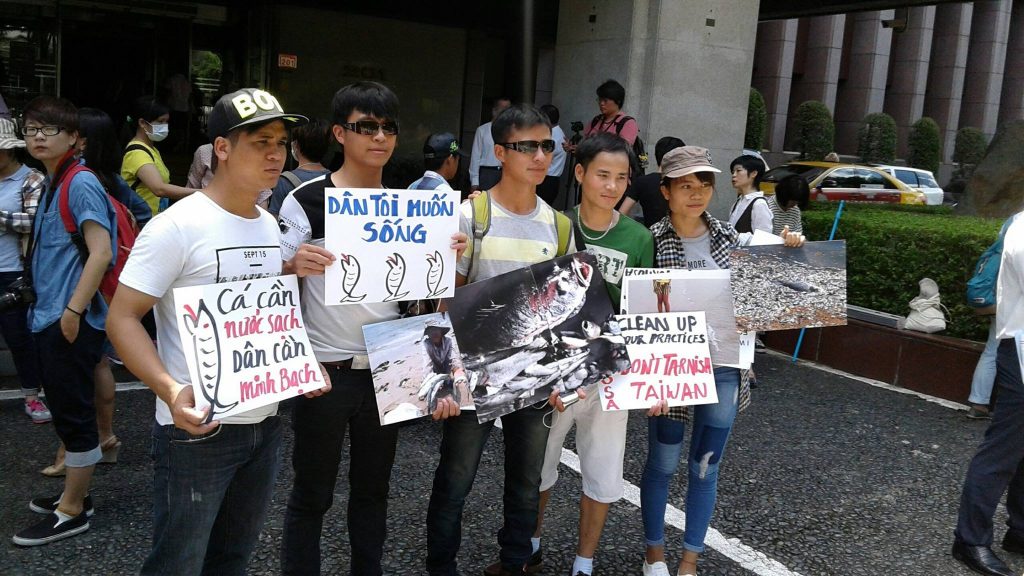 The Formosa Plastics Group is one of the oldest and largest conglomerates in Taiwan, with interests in petrochemicals, electronics, and PVC manufacturing, and having gotten a start in the immediate post-war period with the aid of massive American subsidies. In 2015, the Formosa Plastics Corporation ranked as the world’s fifth largest chemical company by sales. Formosa Plastics is largely controlled by the Wang business dynasty, which includes some of Taiwan’s wealthiest individuals. For example, Cher Wang, one of the daughters of company founder Wang Yung-ching, was named Taiwan’s wealthiest individual in 2011, with a fortune of $8.8 billion. Electronics companies Grace Semiconductor Manufacturing and First International Computer, Inc. were founded by other Wang siblings. Of the Wang siblings, Winston Wang is notably close to Jiang Mianheng, a founding partner of Grace Semiconductor Manufacturing and the son of former Chinese president Jiang Zemin.

If in Vietnam, the Vietnamese government has acted to defend Formosa Steel, environmental damage caused by Formosa Plastics as carried out in collusion with cronyist government authorities is nothing new for the company in Taiwan, either. During the period of Chiang Ching-Kuo’s rule as dictator, Formosa Plastics’ construction of the No. 6 Naptha Cracker in collusion with the KMT developmentalist state provoked mass outrage, leading to a protest of 20,000 against a proposed chemical complex by Formosa Plastics in December 1990—this being a landmark protest in Taiwan’s transition from authoritarian rule to democracy. Since then, over 169 illegal dumping sites, including more than 8,000 tons of mercury waste, have been linked to Formosa Plastics in Taiwan.

As an international corporation with plants located across the world, industrial accidents by Formosa Plastics-owned plants have also occurred in America, with five employees in a Illinois killed after an chemical plant explosion and 11 workers injured after an explosion in a Texas chemical plant. But Formosa Plastics’ longer history of illegal dumping is also evidenced in its dumping of 3,000 tons of mercury waste in Sinhanoukville, Cambodia in 1999 through bribery of government officials, an action which led to the deaths of three villagers. After eventually removing the waste through contracting the Cambodian army, Formosa Plastics first tried to ship this waste to dispose of it in California and then in Nevada. 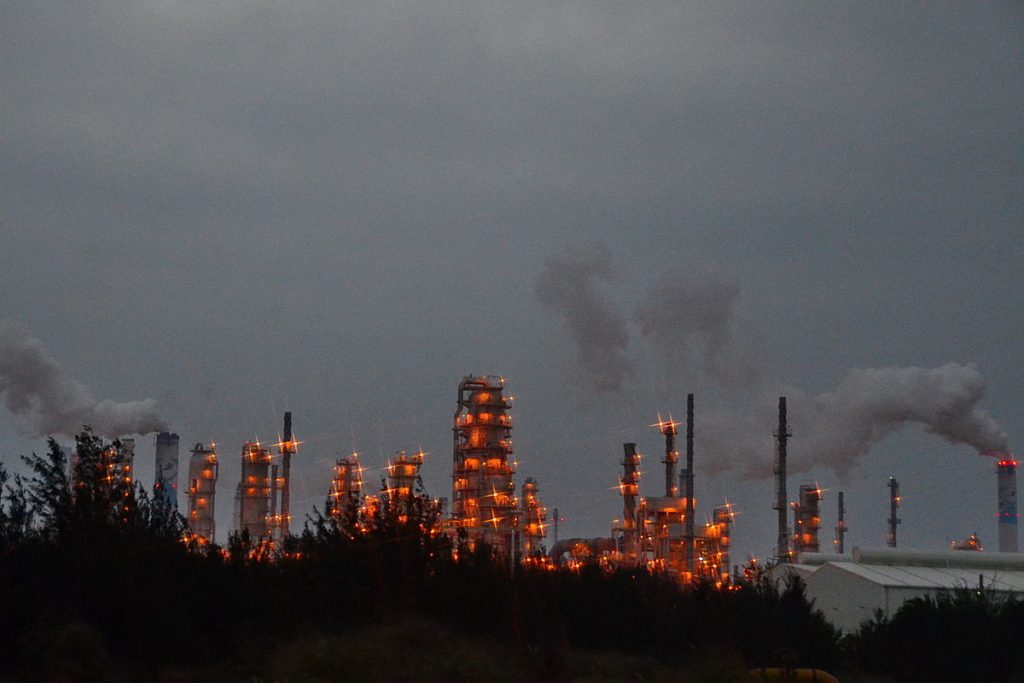 Otherwise in America, Formosa Plastics has also been charged with illegal pollution in Delaware, Louisiana, and Texas, leading the EPA to issue a $13 million fine to Formosa Plastics for environmental damage in Point Comfort, Texas and Baton Rouge, Louisiana in 2009. A 2009 report released by Texas A&M indicated genetic damage in cattle as far as six miles away from Formosa’s chemical plant in Point Comfort, where workers have also dealt with concerns of brain cancer and cases of neurological damage for decades.

Formosa Plastics has at times filed lawsuits against critics, hoping to silence them. An incident in recent memory would be Taiwanese academic Ben-Jei Tsuang of National Chung Hsing University being sued by Formosa Plastics for accusing the plant of causing increased cancer risk in the vicinity of a hydrocarbon-processing facility in Mailiao, Taiwan. After Tsuang was sued for defamation by Formosa Plastics, over 1,000 academics worldwide would rally in defense, with a petition. Signatories included Nobel laureate Lee Yuan Tseh, whose Nobel Peace Prize was in the field of chemistry. As a result, Formosa Plastics has seen demonstration by environmental activists in Taiwan, sometimes with the cooperation of international activists.

Yet though apparently remorseless in regards to its past actions, given its continued actions in illegal dumping and causing widespread environmental damage in the present, Formosa Plastics sometimes attempts to defend its actions by claiming to have created many jobs through the chemical plants it has built. This occurred in the case of Vietnam, with a Formosa Steel spokesman provoking outrage by claiming that Vietnamese would have to chose between the economic benefits that the Formosa Steel plant would bring or fish. With the possibility of its Changhua coal power plant being shut down because of more stringent environmental measures being passed, Formosa Steel also pointed to its record of job creation in the area as a reason as to why the plant should stay open. 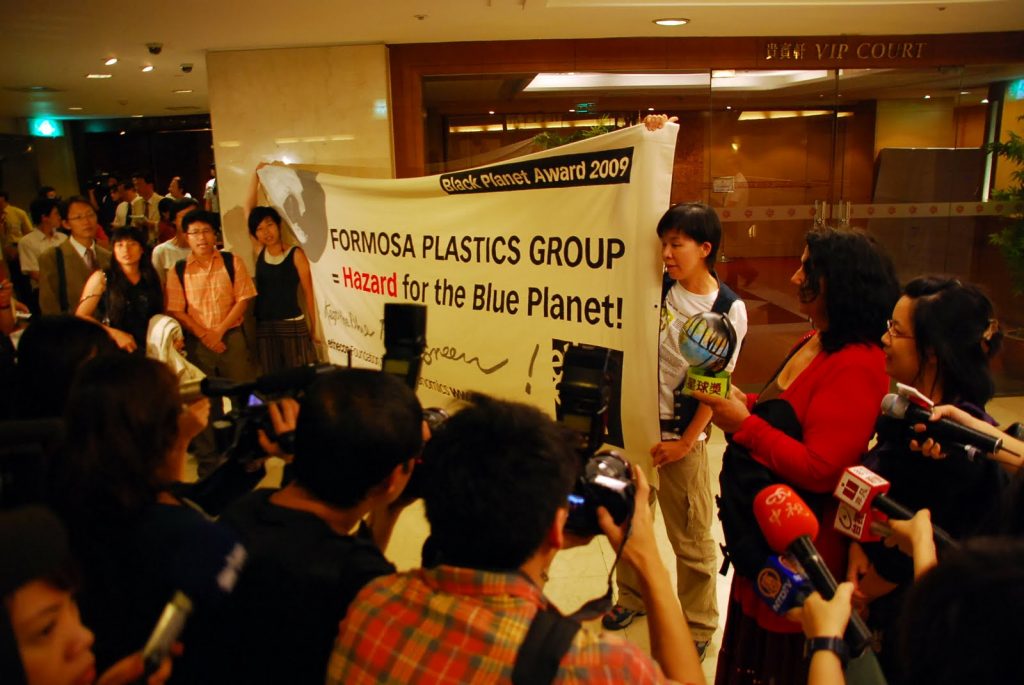 2009 demonstration against Formosa Plastics outside a shareholders’ meeting by members of the Taiwanese Green Party along with Diane Wilson, co-founder of American activist organization CODEPINK. Photo credit: Save the Taiwanese White Dolphin

That would, of course, be the true face of Formosa Plastics. But whether in Taiwan, Vietnam, or elsewhere, it remains that the conglomerate is largely unaccountable in its practices.