A WEEKEND TRIP to the Shanghai Natural History Museum proves the adage that “more is not better.” The building’s graceful white exterior, soaring above the whimsical Jing’an Sculpture Park, contrasts with a cluttered interior: a mess of exhibit halls crammed full of preserved specimens, with only the thinnest of threads tying them together. 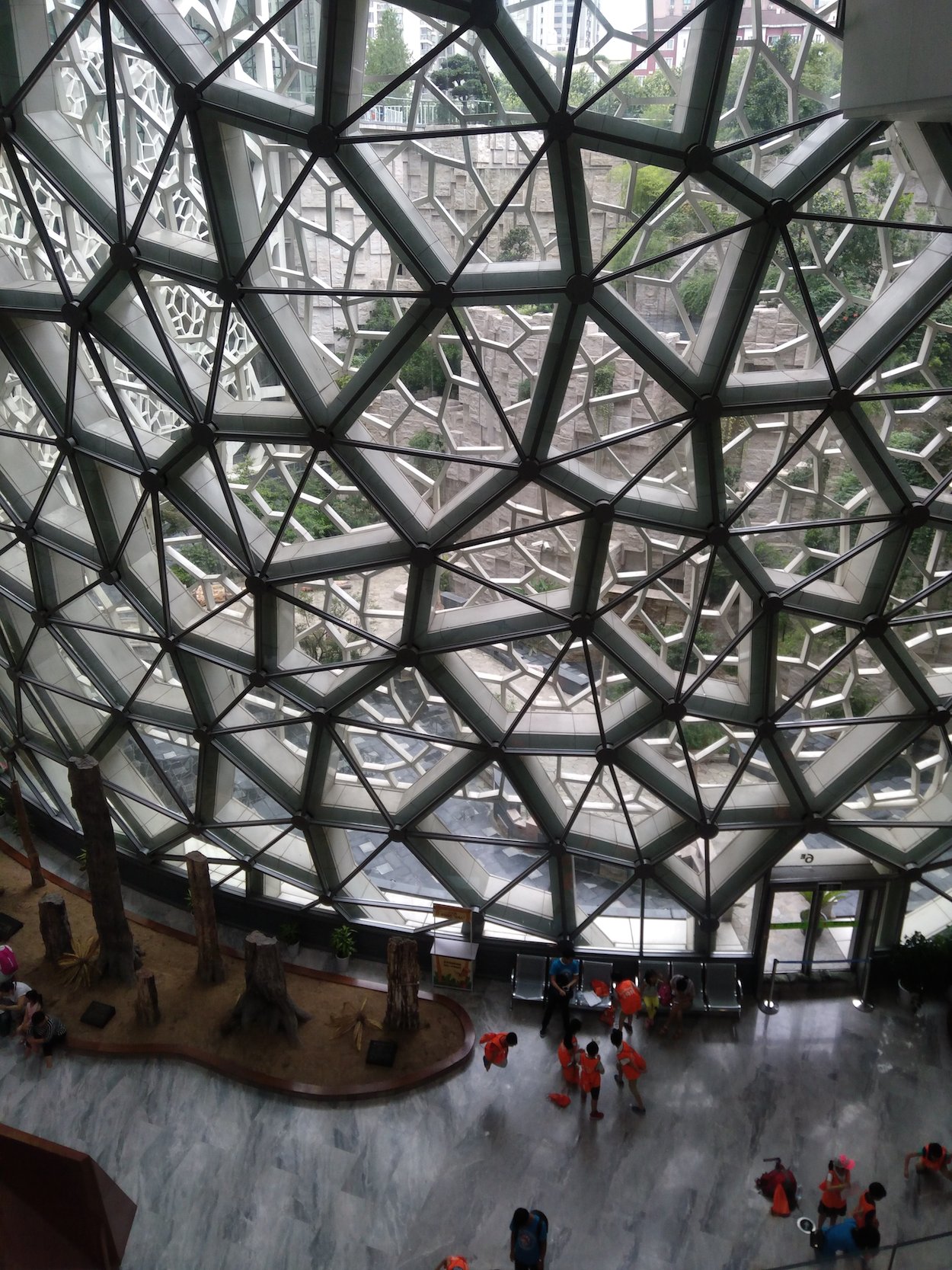 In the twenty-first century, the best museums are purposeful. A compelling story drives every display; each exhibition hall is powered by a coherent theme. In totality, these concepts advance the institution’s larger existential mission. It is surely not about showing off “more stuff.” 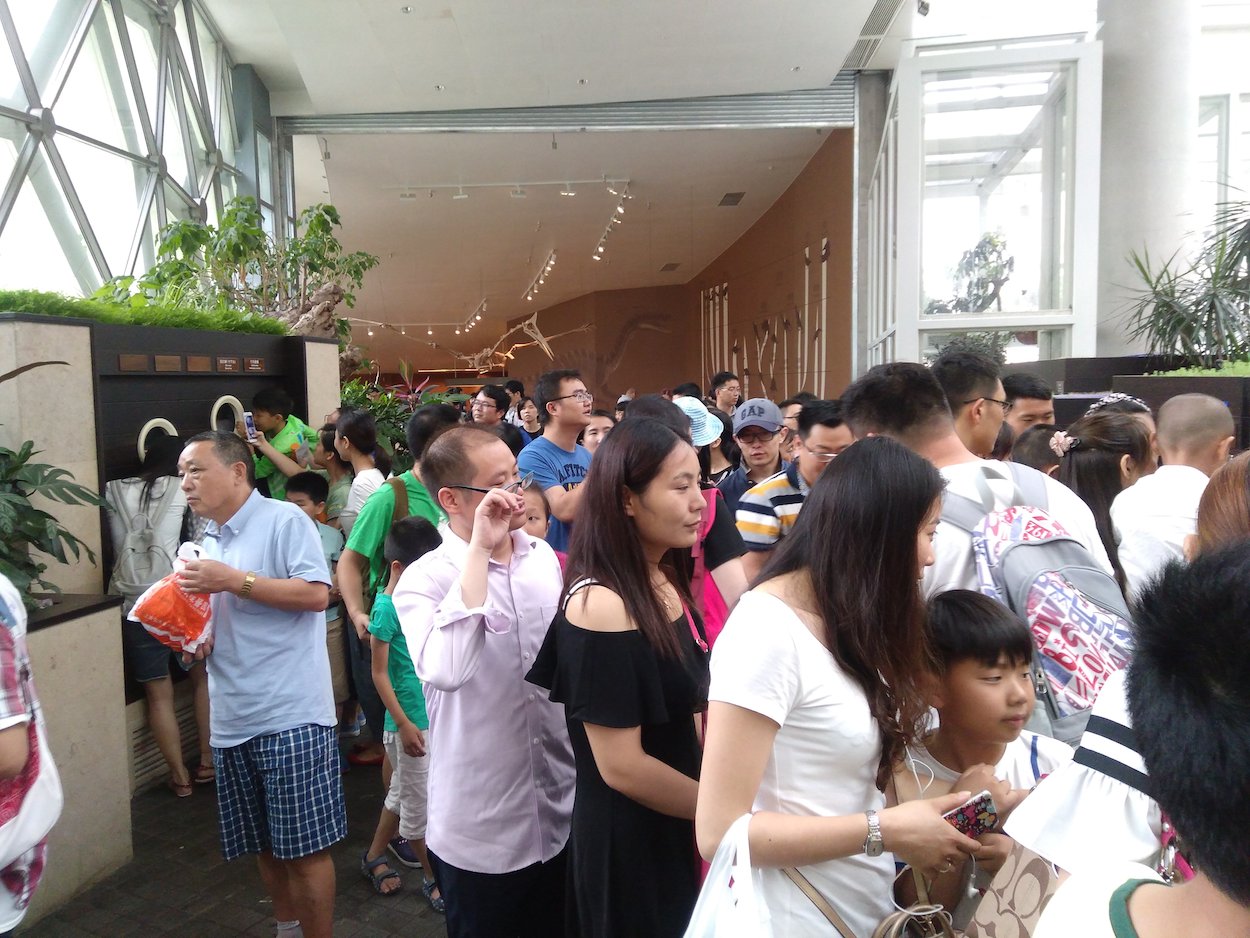 Unmanaged crowds make it difficult for visitors—especially children—to get a closer look at the wildlife exhibits. Photo credit: Kevin Hsu

Unfortunately, the Shanghai Natural History Museum seems to have missed the memo. The venue taps directly into the psyche of a nouveau riche Chinese collector, proud at how much “stuff” he has acquired. The result is a disappointing display of crass consumerism in the guise of natural history.

AFTER PAYING the entry fee, guests are herded up to the second floor, where a cursory “Big Bang” display marks “The Beginning.” The exhibit abruptly ends, shunting visitors onto a crowded ramp of Life to start a disconcerting journey through halls that spiral down four more floors.

Stuffed animal carcasses line the ramp, while large models of sea creatures hang from the rafters above. Most guests are busy taking selfies and ignore the explanatory signs, which also feature less-than-stellar English translations. 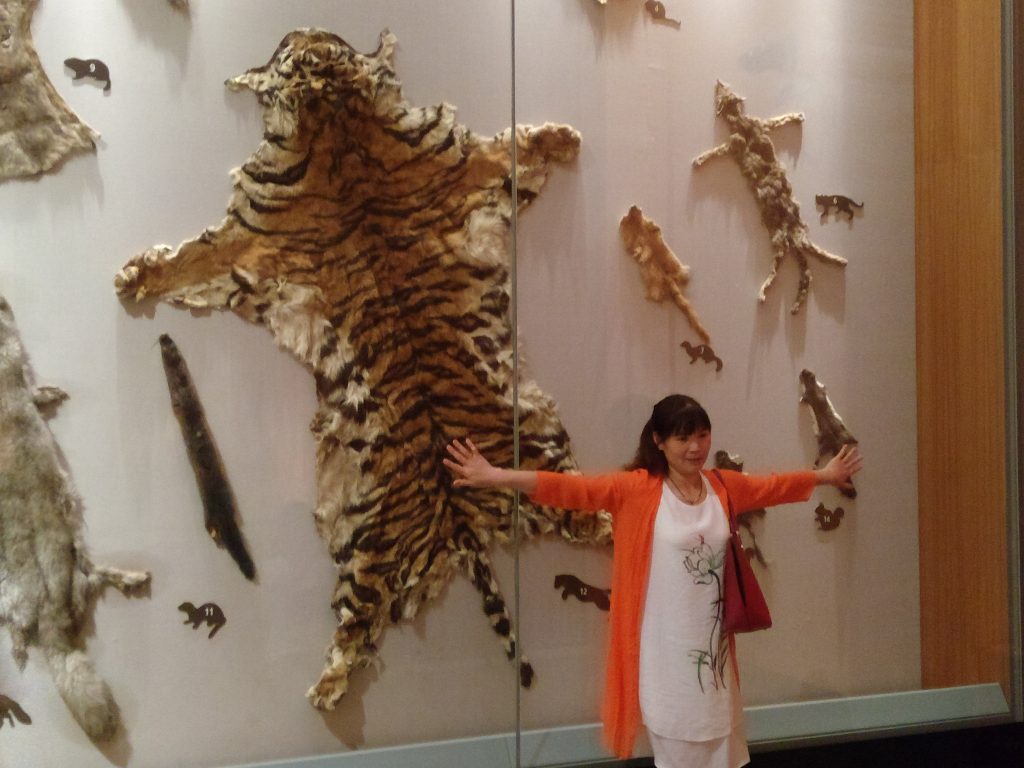 A woman poses with tiger pelts in the museum. Photo credit: Kevin Hsu

One senses a small spark of possibility when visitors get up-close-and-personal with some of the magnificent wild animals. However, so many fauna packed together side-by-side makes it easy to be distracted by the next fuzzy animal. Furthermore, the overcrowding of human visitors allows only a brief look, before one is jostled forward. A Brachiosaur braying in the background—it stretches its mechanical neck and periodically roars—adds to the din of shrieking children, mixed with even-louder adults.

THE EXHIBITS ARE ad hoc grab bags desperately in need of coherence. One gets the impression that displays were farmed out to completely separate teams who avoided communication. Each exhibit is a guessing game: Is the theme geography? Scale? Taxonomy? Chronology? Timelines sometimes run from left to right, other times right to left. Without a reasonable explanation, things become plainly ahistorical when dinosaurs that lived millions of years ago are mixed among Stone Age creatures. 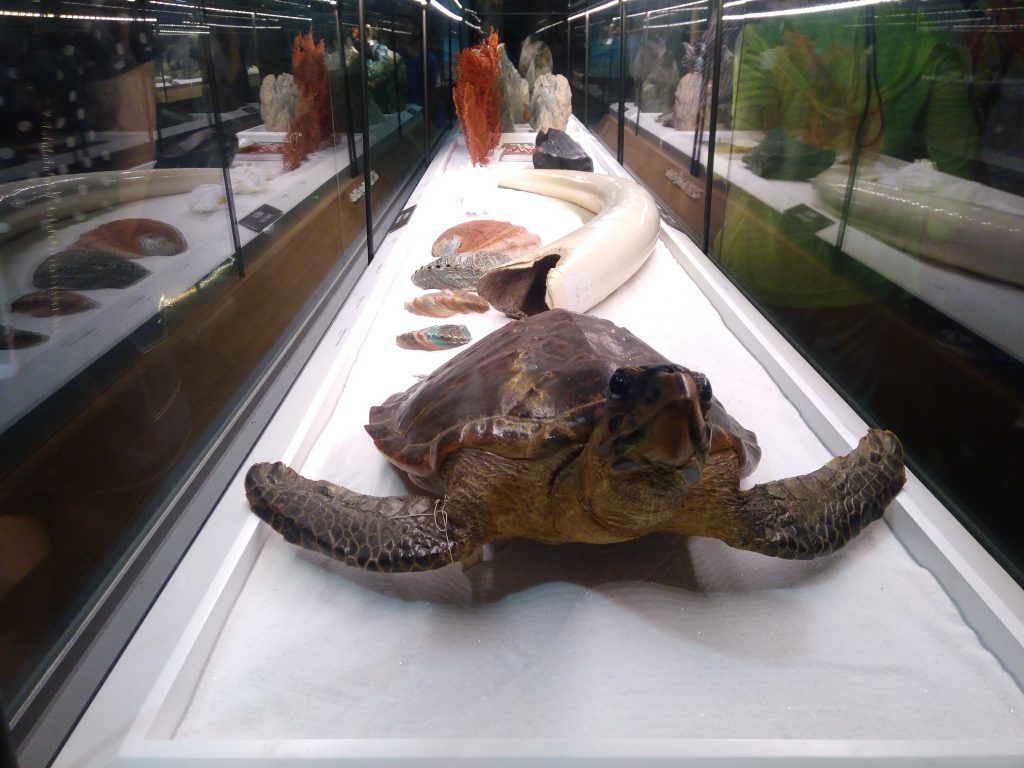 Traversing each floor is like wandering into the lair of another deranged taxidermy enthusiast trying to impress you with his collection of knickknacks ensconced in glass cases and specimens mounted on walls. Placing organisms into their natural habitat would help visitors understand the larger context and foster an appreciation for nature as a connected system. 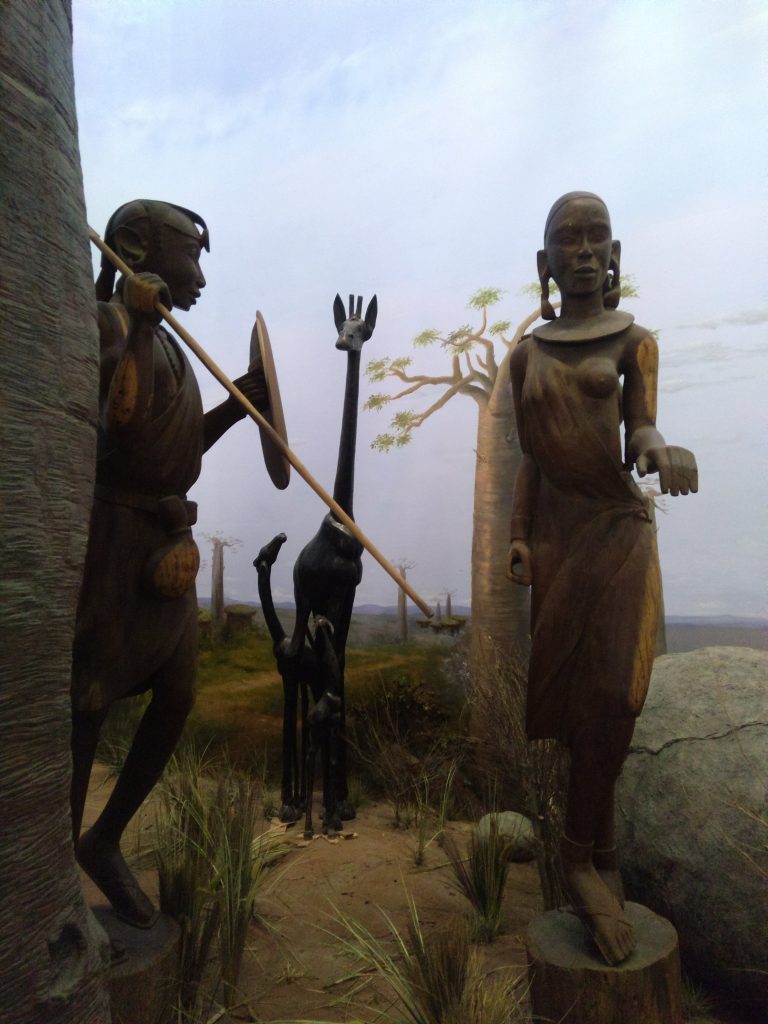 The Masai people might not appreciate being pinned to the end of an exhibit on African mammals. Photo credit: Kevin Hsu

From an architectural design perspective, the arrangement of exhibits results in too much crowding on upper floors and empty halls later on. Why not spread the most popular exhibits among different levels? At times, the museum feels like a Chinese subway station, where relief can be found only at far-flung exits. With crowds always pushing at your back, it’s rare to spend more than a few moments in front of any display. Places for quiet contemplation are conspicuously lacking.

Educate With Wonder, Not “stuff”

THE MOST DISAPPOINTING aspect of the museum is the lack of attention to any educational purpose. An obvious and vital lesson could center on the majesty of nature, and humanity’s impact on the environment, which threatens innumerable species. Instead, the atmosphere feels carnival-like, rather than inspirational.

A lonely wall with some boilerplate language about “sustainable actions” appears to be an afterthought, and was one of the emptiest places in the whole building. 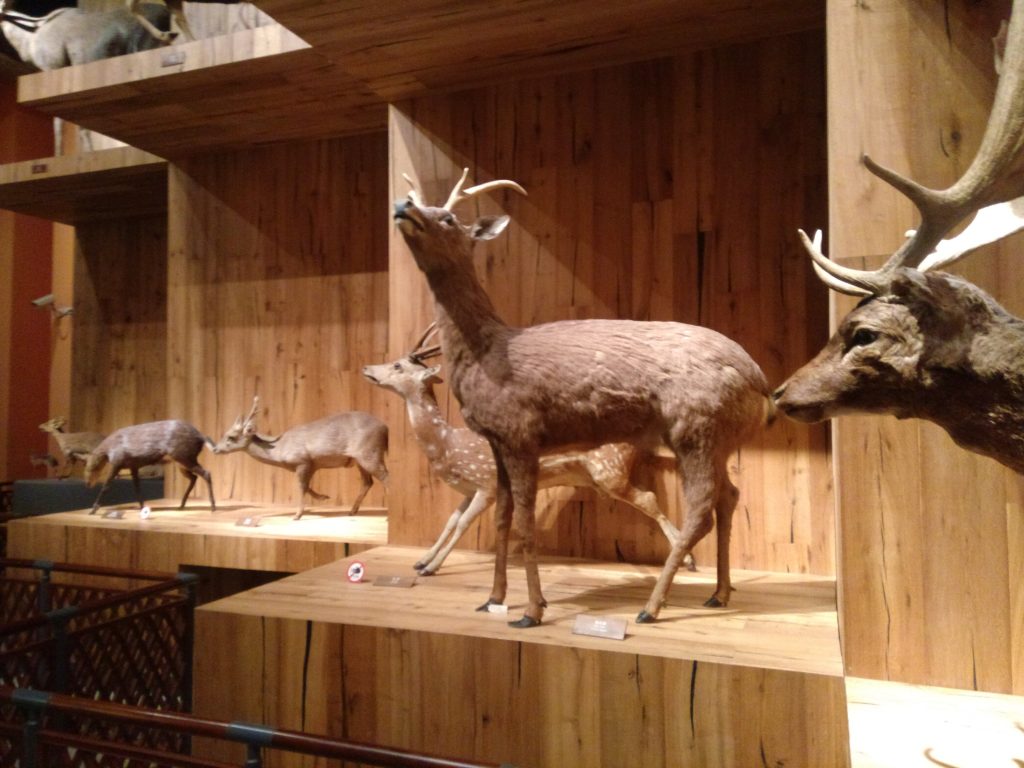 Stuffed carcasses are lined up like goods on display at a used-car sales lot. Photo credit: Kevin Hsu

There’s plenty of potential, if only the curators saw their mission as education, not window-shopping. The museum’s energies could be spent weaving a coherent story across exhibits, instead of simply highlighting the vastness of its collection. “More stuff” is not a virtue if people cannot understand what they’re seeing, or why.

Why not tell a story about the natural world? In an age of nature deficit disorder, this might be the closest that children come to the wild. about Could a visit to the museum help them discover a fascination with nature, so they might grow to love it and be willing to protect it? 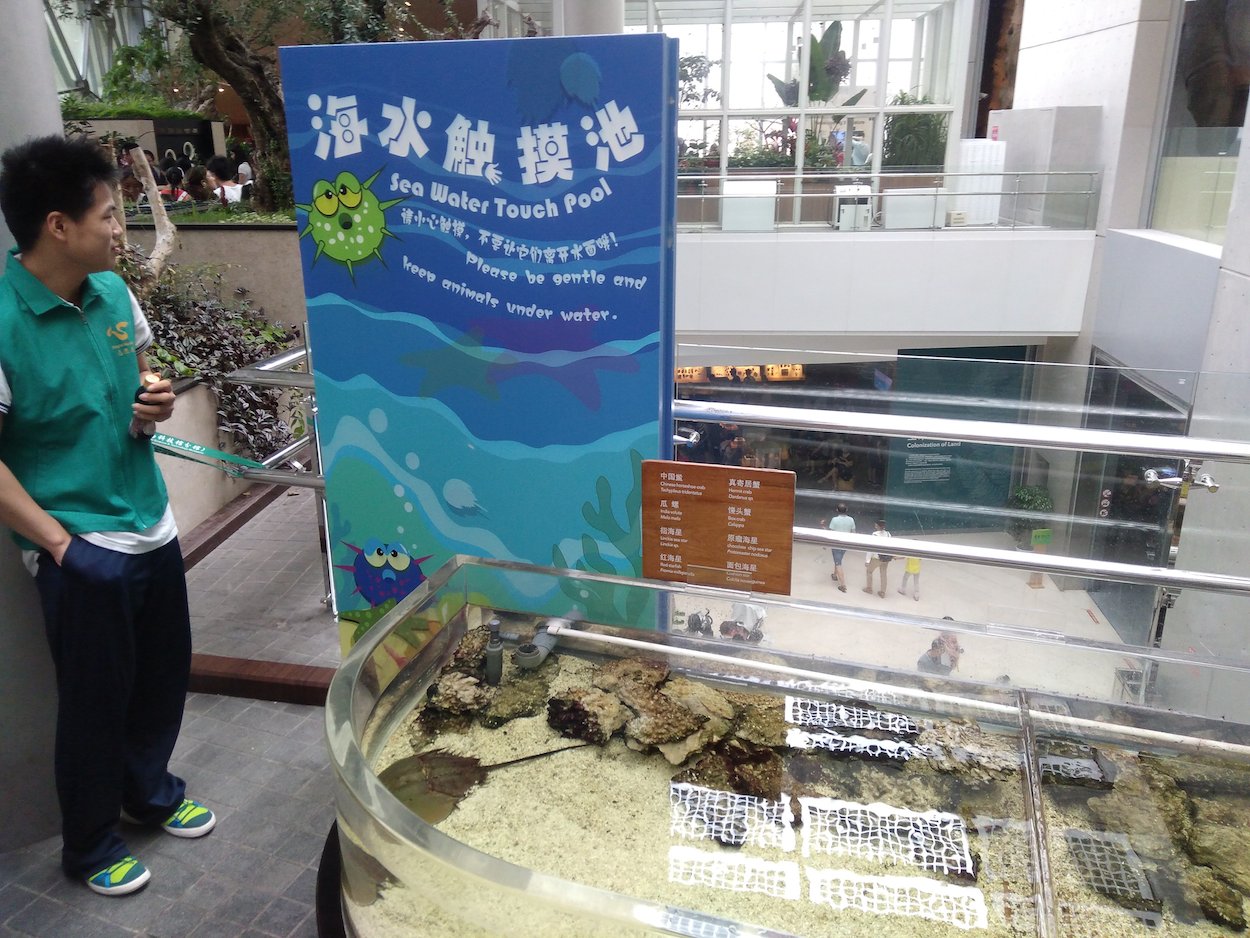 Sea creatures about to be abused by clutching hands. Photo credit: Kevin Hsu

By merely presenting an overstuffed, incoherent cabinet of curiosities, the Shanghai Natural History Museum forgoes the chance to connect the next generation to the natural world. It’s a missed opportunity in a country that sorely needs to understand that we, human beings, are part of nature—and that we share the planet with countless other amazing species who have as much right to be here as we do.