POKÉMON GO would all be the rage in Taiwan these days. After some period of anxiety as to whether Pokémon Go would be making its way to the Taiwanese market, the game was finally released in Taiwan on Saturday, August 6th.

In densely populated urban areas of Taiwan since, the streets would have been filled with Pokémon trainers staring at their cell phones. Some have bemoaned this as contributing to the addiction of many young Taiwanese towards cell phone use—with young Taiwanese sometimes being labeled as the “bowed head tribe” for forever having their heads bowed over their cell phones, staring at the screen (低頭組). Likewise, traffic violations caused by drivers playing Pokémon Go while driving in the past week have spiked. 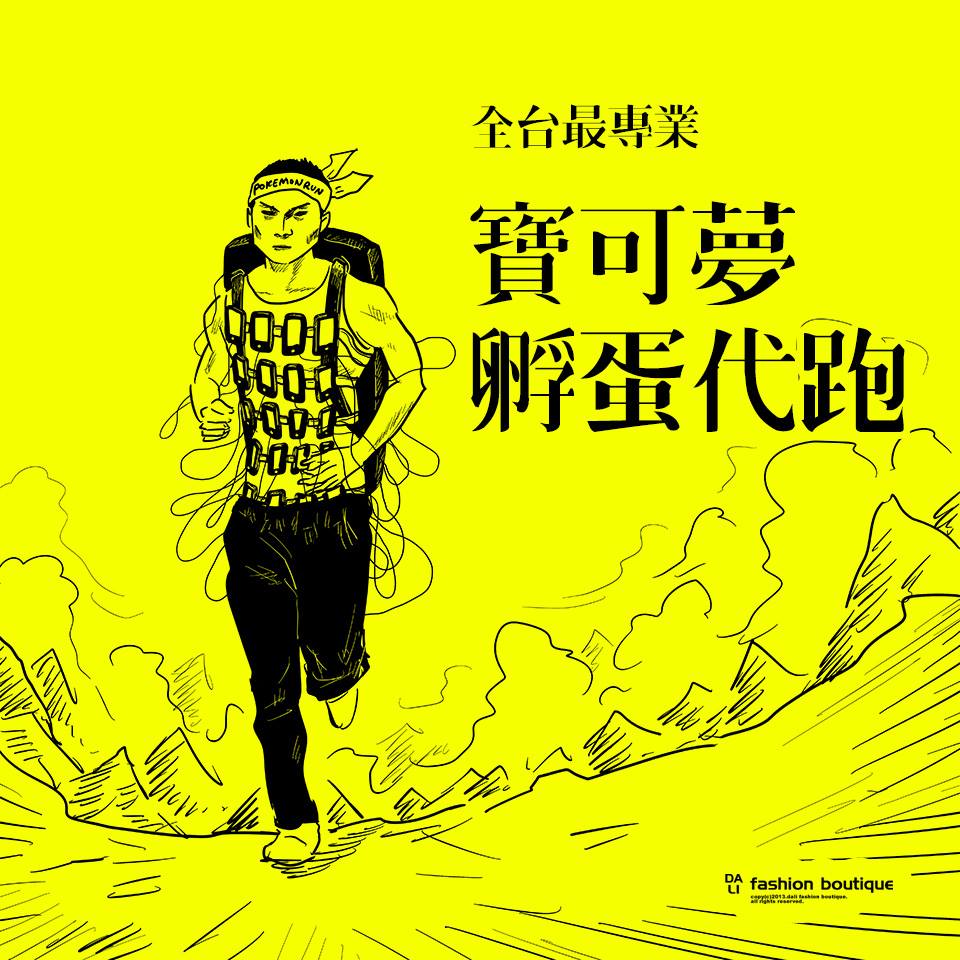 Comic making fun of the extreme preparation some players go to in order to play Pokémon Go. Photo credit: 大力

But at the same time, this would probably represent the introduction to Taiwan of a historic phenomenon, in which virtual reality gaming as integrated into everyday life has succeeded for the first time as mass phenomenon. Though there had been many such attempts to integrate virtual reality gaming into everyday life, Pokémon Go may be the first case in which this has become a mass phenomenon.

The Craziness Around Pokémon Go in Taiwan

POKÉMON GO is developed by Niantic, Inc., in cooperation with the Pokémon Company and Nintendo, but uses many technological features previously developed as part of Niantic’s previous gaming effort in the same vein, Ingress. Yet, of course, Ingress was not a massive success in the way Pokémon Go has been. This probably can be attributed to the appeal of Pokémon. Pokémon, of course, particularly appeals to those who grew up during the 1990s, having a large degree of nostalgia factor for those who grew up then. As such, even if a surprising number of older individuals have also been drawn into the game, the success of the game among young people in Taiwan or in other parts of the world is not surprising. 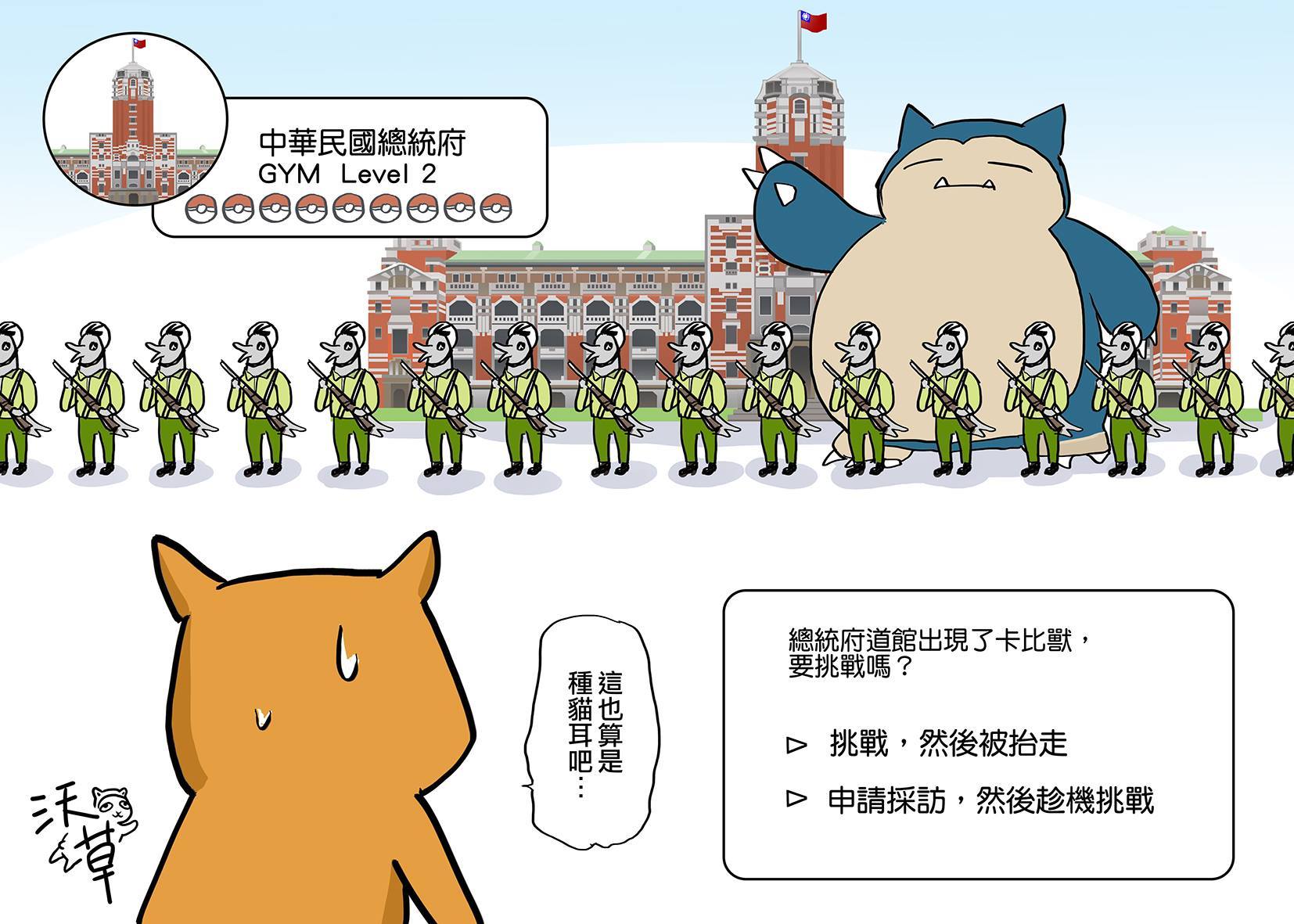 Comic mocking the extreme steps players take in the course of playing Pokémon Go, for example, potentially considering breaking into the Presidential Residence because it is a “Pokémon gym” within the game. Photo credit: 沃草！（Watchout）

Seeing as the Pokémon Go application must always be open on the cell phone screen to play, despite the game necessitating a large degree of movement, accidents have also occurred because individuals were staring too intently at their screens while playing to pay attention to their surroundings. On the other hand, Pokémon Go has also been an occasion to lure outside many individuals who would have otherwise just stayed indoors, with their air conditioning, and sat in front of their computers. Still, the logical culmination of the phenomenon is also likely visible in the recent announcement of a tour bus service for catching Pokémon, which will ferry passengers around Taipei and other urban areas in order to catch Pokémon.

HOWEVER WHAT would also be shared between Taiwan and the other countries in which Pokémon Go has been introduced would be the rapid appropriation of the game to make political statements. For example, on day one of the release of Pokémon Go, KMT headquarters—a “gym” for Pokémon battles within the game’s virtual setting, would become occupied by a trainer whose main Pokémon was a Tentacruel. This was apparently a statement about the insidious and shadowy nature of the KMT, Tentacruel being a jellyfish-like Pokémon with many tentacles and, as its name suggests, a cruel appearance. 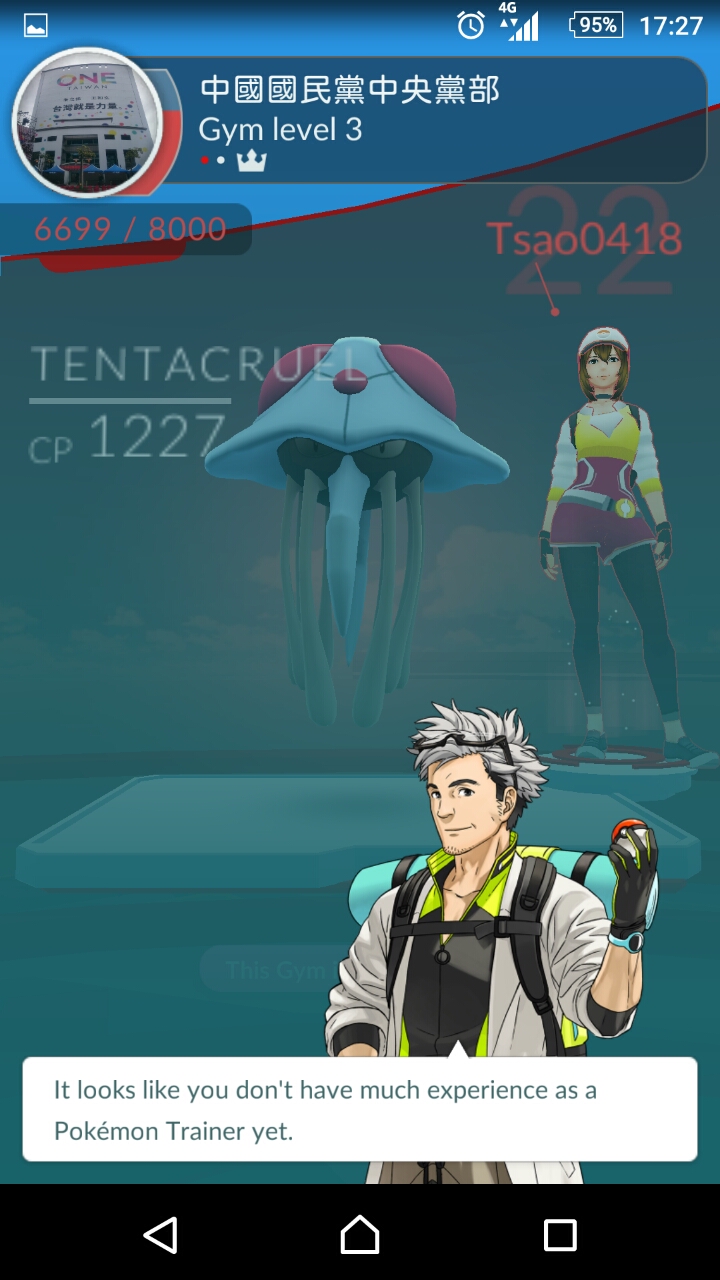 Similar incidents have happened elsewhere in other countries in which Pokémon Go has been introduced. In America, for example, with the possibility of a Donald Trump election and both major political parties in crisis, the White House—also a Pokémon gym—would become occupied by a trainer whose Pokémon was a Pidgeotto named “MERICA”—Pidgeot being a bird Pokémon resembling an eagle (despite actually being a pigeon) and ‘Merica having becoming in recent years a dismissive, joking way for Americans to refer to their country’s recent political missteps. This, too, was a political statement. 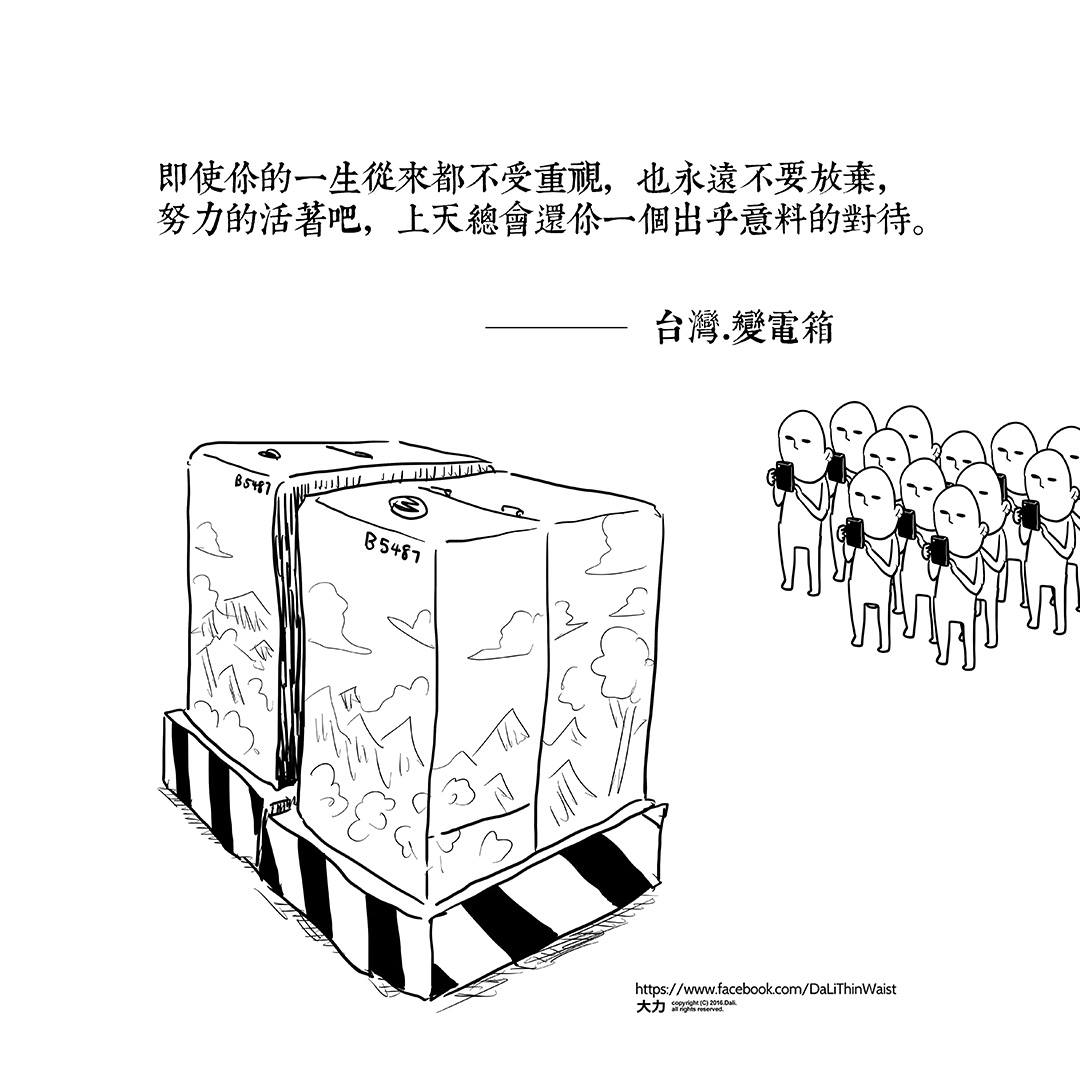 Otherwise, jokes regarding Pokémon have been aplenty, with many Internet memes mocking the behavior of the extreme steps some individuals have taken or considered taking in the course of playing the game, or the strange phenomenon that the game has caused in urban areas. The common usage of electric power generators as “Pokéstops” for Pokémon trainers resupplying in the game has led to large numbers cell-phone toting individuals gathering inexplicably in front of power generators in cities, for example. 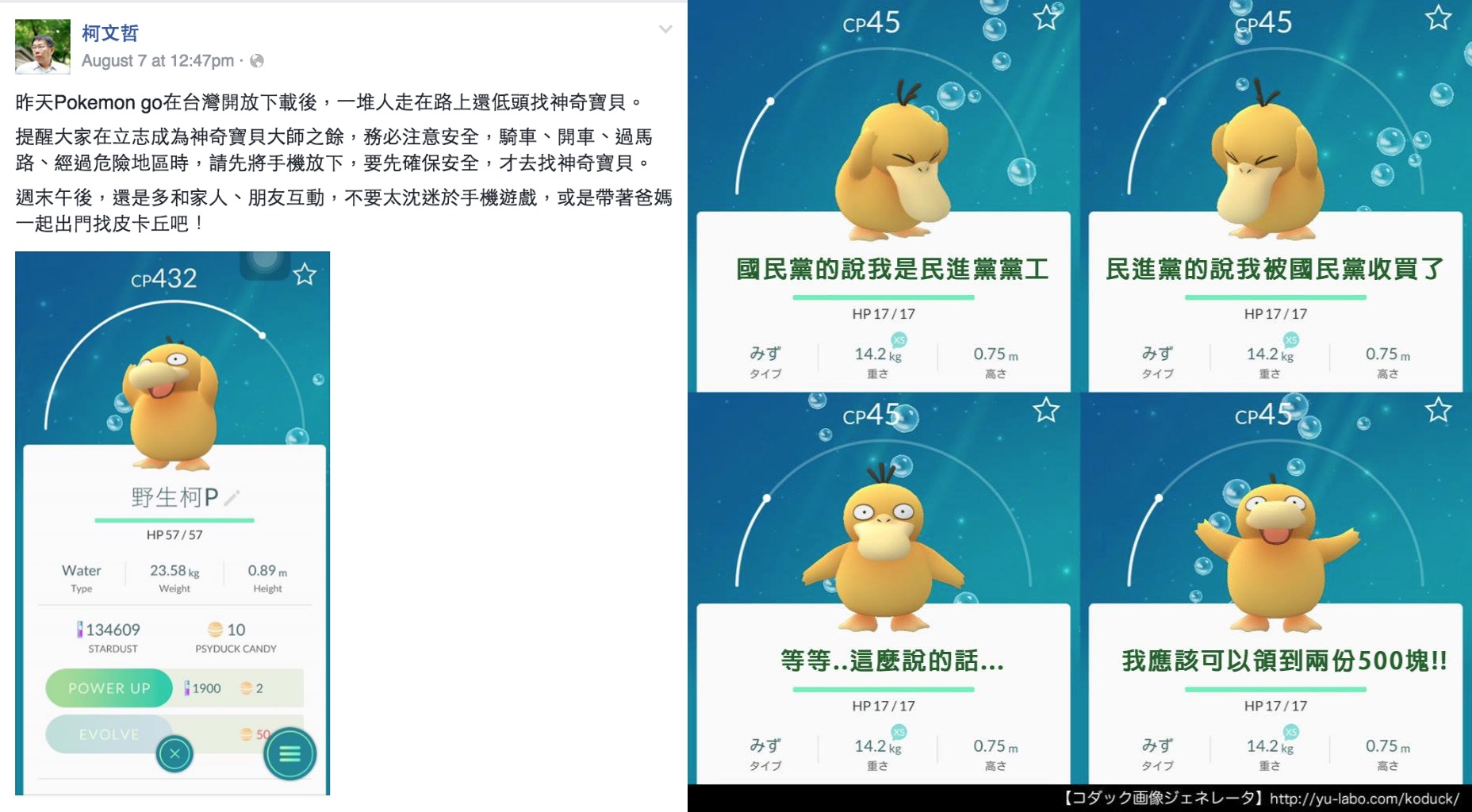 On the left, an image released by Taipei mayor Ko Wen-Je on Facebook, joking on the resemblance between his own face and the Pokémon Psyduck. On the right, political commentary on the Facebook page 不禮貌鄉民團 regarding the perception of Ko Wen-Je’s political actions using an image of Psyduck. Photo credit: Ko Wen-Je and 不禮貌鄉民團

Politicians as Taipei mayor Ko Wen-Je would get in on the action, posting the picture of a Psyduck named “Wild Ko P” and commenting on how the blank expression of the Pokémon resembled his own face. Psyduck being a duck-like Pokémon with a vacant gaze and Ko P being Ko’s nickname, many found Ko’s self-mockery hilarious, even among his political detractors. Subsequently, Psyduck would also become used as a way of political mocking Ko, however. Likewise, along such lines, perhaps more strange than humorous, before the release of Pokémon Go in Taiwan, a KMT fanpage would release a video depicting members of the New Power Party as Pokémon to be caught. Though the video was somewhat incomprehensible—one wonders, for example, who exactly the target audience was—presumably this was a critique of the New Power Party, which is frequently at loggerheads with the KMT. 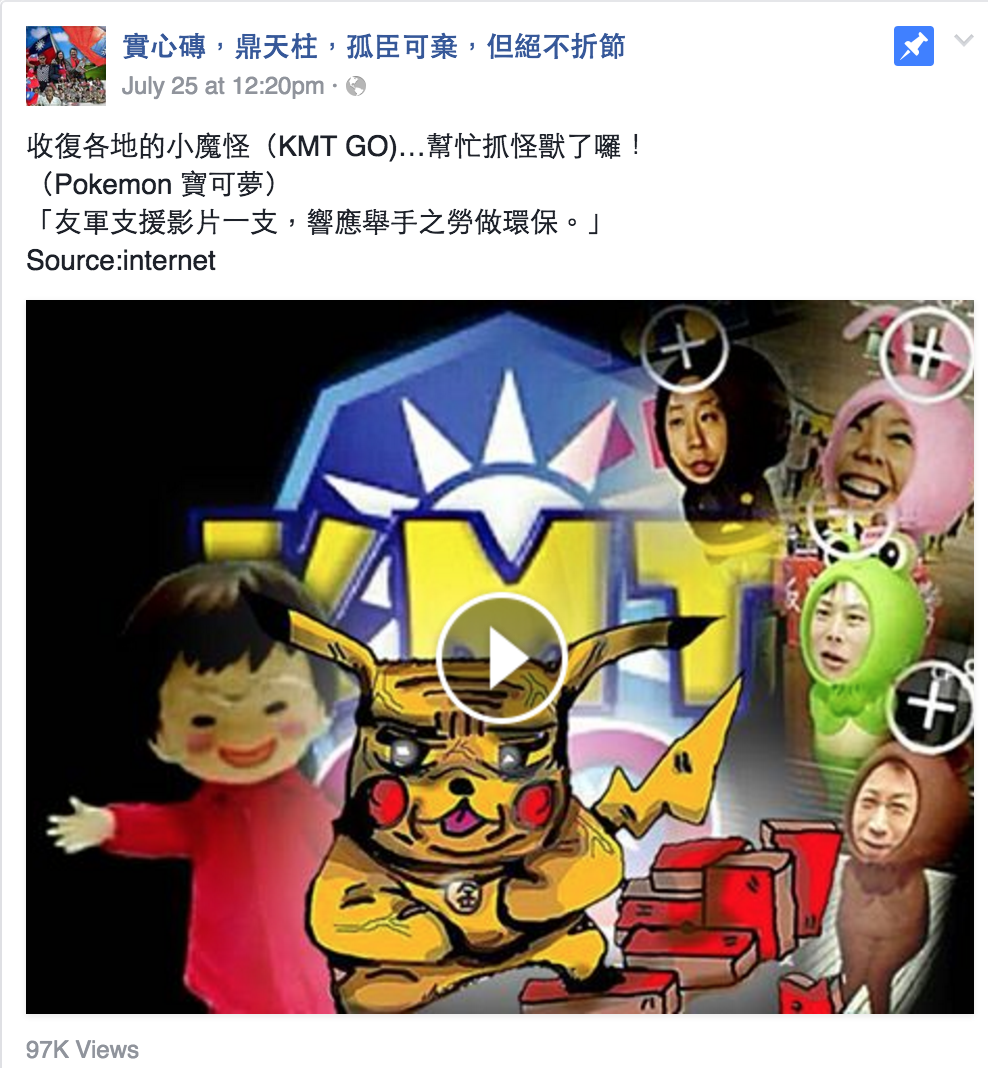 Video released by KMT fanpage depicting the NPP as Pokémon to be caught. Photo credit: 實心磚，鼎天柱，孤臣可棄，但絕不折節

Pokémon Go has made its entrance into Taiwan. And, as with elsewhere in the world, it may be here to stay. Regardless, it may be that the introduction of Pokémon Go will be seen as a historic phenomenon in the development of virtual reality and video game technology and its integration into the everyday.

Taiwan already has many possibly unique social phenomenon because of the high integration of social media platforms like Facebook, messaging applications as Line, and online forums as PTT into everyday life, in particular, having the highest Facebook penetration in the world and Internet phenomenon as having served as an incubator of political activism among youth in recent years, contributing to the formation of the youth activist subculture which currently exists in Taiwan. It will be seen as to what phenomenon may arise in Taiwan following the introduction of Pokémon Go, as a result of these possibly unique characteristics of Taiwan in the Internet age.