Controversy Over Possible Nuclear Reactor Restarts Under the Tsai Administration

THE DEBATE OVER nuclear energy in Taiwan has heated up again as a result of controversy over Premier Lin Chuan’s proposed possible solution to the energy crisis in Taiwan of restarting the No. 1 reactor of the Jinshan nuclear power plant in New Taipei City. This has already seen demonstrations from anti-nuclear activists, concerns raised by fellow DPP lawmakers, and the filing of a lawsuit against Lin by anti-nuclear activists.

The Jinshan nuclear power plant has been raised as a particular object of concern by anti-nuclear activists because the plant is an old one, with no design mechanism that allows for retrieving spent nuclear fuel rods and no precedent for reusing spent nuclear fuel rods. Anti-nuclear demonstrators have also questioned whether there is such a pressing power shortage which would require restarting the plant or whether there has sufficient attention devoted to examining what other energy-saving measures could be taken without turning to nuclear power.

However, it seems likely that Tsai administration and her cabinet under Lin Chuan is will be embattled in the near future about nuclear energy. During her inauguration ceremony on May 20th, Tsai seemed to indicate support for an end to nuclear energy through the inclusion of noted anti-nuclear activist Lin Sheng Xiang as a performer, if Tsai did not directly refer to nuclear energy in her inaugural address. But turning the Jinshan nuclear power plant back on would probably be taken as Tsai going back on her word, scarcely twenty days in office, or as having promised too much, too soon.  Tsai has reiterated plans for phasing out nuclear energy by 2025, nevertheless. 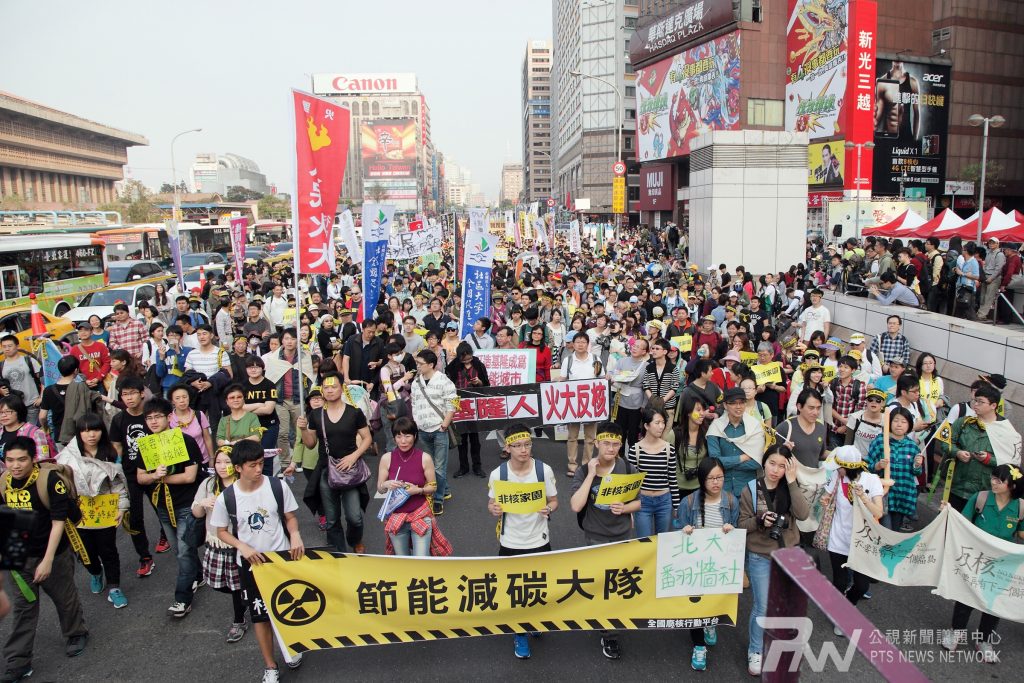 If Tsai has already faced criticism from youth activists for stalling on issues of transitional justice, probably the issue of nuclear energy would soon become another object of critique. In recent years, the anti-nuclear movement loomed large in social activist circles, coming to stand for a variety of domestic environmental issues in Taiwan. Thus, recalcitrance on the anti-nuclear issue by the Tsai administration will be seen in line with recalcitrance on broader domestic environmental issues, not just directly those pertaining to nuclear energy.

And this may be an issue that the Tsai administration becomes embattled on. It is to be remembered how large anti-nuclear protests in recent years were. The occupation of the Legislative Yuan in March 2014 was preceded by a demonstration by 50,000 individuals earlier that month in Taipei, with other events in other parts of Taiwan with an attendance of a combined 30,000. After the withdrawal from the Legislative Yuan, in late April, 50,000 would occupy Zhongxiao West Road in Taipei as part of a sit-in against nuclear power during a hunger strike by former DPP chairman and martyr of the democracy movement Lin Yi-Hsiung.

A Broader Failure of Communication by the Tsai Administration?

BUT THE ISSUE at hand would not only be that Taiwanese civil society may come to turn against the Tsai administration because of its moving too slowly on the issue of nuclear energy for their tastes. Namely, the deeper problem at hand probably comes from the Tsai administration—under the cabinet led by Premier Lin Chuan—failing to establish lines of communication with Taiwanese civil society and Taiwanese society more broadly regarding gradual steps to realize its political program.

In particular, Tsai’s cabinet under Lin Chuan is seen as technocratic, by unilaterally declaring measures for Taiwan without consultation with broader society even when it comes to controversial issues or issues that the Tsai administration made into key parts of its platform during past elections. For example, the Lin Chuan cabinet has already come under fire for still wanting to pass the CSSTA trade bill which was demonstrated against during the 2014 Sunflower Movement. The Lin Chuan cabinet also sought to pass a version of a bill to regulate future cross-straits exchanges between Taiwan and China which would have still automatically passed cross-straits bills that were not discussed within a certain window of time legislature—retaining the “Black Box” which also demonstrated against as part of the Sunflower Movement. Such actions were in spite of that Tsai largely rode off of momentum from post-Sunflower civil society in order to be elected into office.

The issue of nuclear energy would be another case in point, except where the issue of the CSSTA or the proposed cross-straits oversight bill were international issues, nuclear energy is a domestic issue. Yet this is perceived the Tsai administration flip-flopping on the issue, particularly as a result of how Lin Chuan is seen as having rather unilaterally decided to go back on the word of the Tsai administration in mulling over the possibility reactor restarts, for example, without any attempt to claim that this would be a temporary stopgap measure because of temporary energy needs as part of a broader policy aimed at phasing out nuclear energy. Again, this will be understood within a broader pattern of recalcitrance on key issues, including the aforementioned international ones, and as foreshadowing future backsliding on domestic issues.