Review: Map of an Onion

KENJI C. LIU’S Map of an Onion, the winner of the 2015 Hillary Gravendyk Prize and a finalist for the 2014 Hong Kong University International Poetry Prize, stands out as a meditation on diasporic experience which is not only profound, but one aesthetically well-crafted. A thread running through his poetry in Map of an Onion would be that of “deconstruction,” with Liu’s explorations of identity as spanning across his family’s background in Taiwan, Japan, China, and the US.

In this, Liu’s explorations cut across not only a history deeply bound up with diaspora, but also colonialism. Throughout the poems which comprise Map of an Onion, Liu is always firmly conscious of what it is that comprises borders—policed, as they always are, by a “republic of papers”—as well as the role of identity as very often formed out of and around the cleavages of national borders. Stand-out poems regarding this thematic include “Deconstruction: Papers” and “Deconstruction: Citizenship”, which incorporate Liu’s personal immigration documents as readymades into the text.

As such, Liu avoids the temptation of much diasporic writing to explore family background through the mytho-poetic lens. Namely, diasporic writing is sometimes aimed at enlarging one’s sense of self by incorporating transnationality in one’s self and in that sense is aimed less at the exploration of identity, but at enlarging one’s own sense of identity by incorporating, appropriating cultural elements drawn from one’s background. But, as the title of the book and its guiding thematic of deconstruction implies, Liu here would be aiming not at the recovery of an originary sense of self—which very often actually turns out to be invented or appropriated—but explorations of self and identity as constructed out of fragmentary, diasporic experience as split across borders. And this would be a mature project. 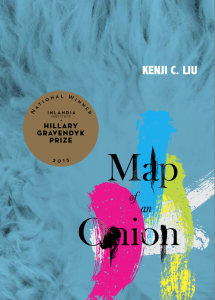 Book cover of Map of an Onion

Liu at times comes across as too directly political in his poetry, this not in the sense that political concerns do not undergird all of his poetry, but in the sense that he seems to show too many of his cards at times. We see this in a poem as “Deconstruction: Capital”, which is composed out of an exchange between Pussy Riot member Nadia Tolikonnikova and Slovenian philosopher and critical theorist Slavoj Zizek. We see this also in poems incorporating text from Michel Foucault, Judith Butler, and others. These poems run the risk of being pedantic. On the other hand, a poem as “Elegy for Kimani Grey” strikes a far better balance between political intent and aesthetic effect.

In the incorporation of multiple languages into his poetry, Liu’s intent would seem to represent the fractured nature of diasporic experience, with use of Chinese, Japanese, and Spanish in addition to the majority English composition of the poems. As with other writing of this sort, it becomes that few individuals are capable of understanding the text of its entirety of Map of an Onion unless they, too, have had the sort of diasporic experience which has led one to knowledge of these languages. This would be a means of representing the elusiveness of diasporic experience.

Although some of these Chinese and Japanese poems are evidently translated from English originals—as attested to by credits for translators—it strikes that these poems still evidently attest to that they were written in English. The use of Spanish in “Para que siempre sea el señor, estimado señor” actually strikes as more fluent than the use of Chinese and Japanese, probably owing to greater linguistic similarities between Spanish and English, than between English and Chinese or Japanese—even through a process of translation. This would be a means by which diasporic explorations language is not, in fact, infinitely fluid, but is colored and acculturated by one’s experiences, by more familiar tongues and less familiar tongues.

As the title implies, Map of an Onion is a work with many layers. In this respect, Liu’s work is one well-worth exploring.