Obama’s Trip to Hiroshima and the US-Japan Alliance

EARLIER IN MAY of this year, US President Barack Obama made the decision to become the first sitting US president to visit the city of Hiroshima since the United States unleashed the world’s first atomic bomb attack on the city in 1945, an event which abruptly ended the war and ushered in a new paradigm through which the question of international security is viewed. In the interim, Japan has become one of the closest US allies globally as well as regionally, now standing as the US’s 4th largest trading partner and hosting over 52,000 US troops, playing a major role in supporting the United States continued presence in the Asia Pacific region. 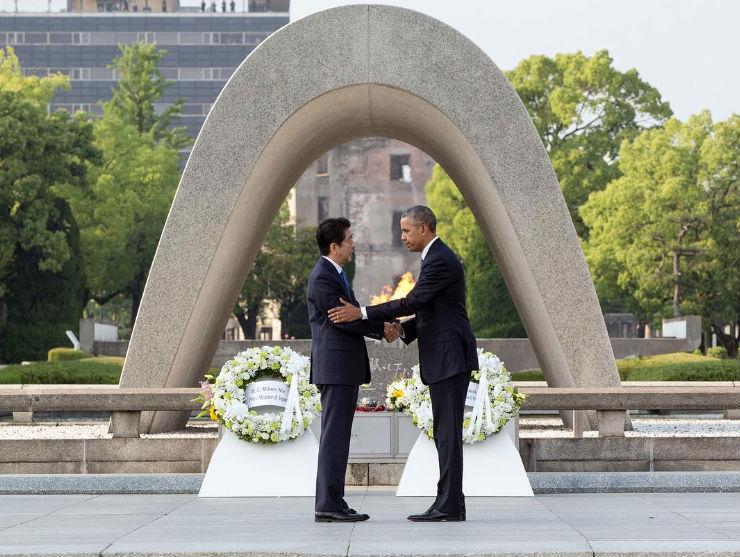 President Obama’s decision to visit the site comes at a time when Japan finds itself threatened by the economic and political rise of China, with whom it has not only deep and abiding historical wounds, but also modern day territorial disputes in the East China Sea and around the Senkaku/Diaoyutai islands. The presidential visit to the site, for which the groundwork had been being laid by diplomatic officials for years, was not without controversy given the highly-sensitive nature of the issue. The ultimate decision to conduct the trip, however, can be viewed as an attempt by the Obama administration to strengthen its bilateral alliance in an attempt to bolster its presence in the region and reassure the Japanese government of its intentions. The trip seemed aimed additionally at bringing attention to the issue of nuclear disarmament, particularly pressing given Japan’s close proximity to North Korea, often considered a rogue nuclear state.

SUCH REASSURANCES on the part of a sitting US president may indeed be necessary given the reaction to the visit by Donald Trump, currently the presumed 2016 presidential nominee of the Republican party. Trump unleashed harsh criticism of the presidential visit to the memorial on Twitter, namely that the President had not brought up the 1941 attack on Pearl Harbor in Hawaii by the Japanese air force. In a joint press conference earlier in the week, President Obama and Japanese Prime Minister Shinzo Abe clarified that the attack on Pearl Harbor was not to be the focus of the presidential visit, stating that Abe had no plans to visit the site of the attack himself.

That the presumed presidential nominee of the Republican party would make a statement refuting any attempts to apologize for US military action isn’t in and of itself surprising, given the strong sentiment of American exceptionalism observable in the Republican electorate. However, Trump’s statement on the presidential visit does not stand in isolation. Throughout his campaign, he has made several statements which reflect a fundamental misunderstanding of the Asia Pacific region, which have caused a fair amount of concern both within US diplomatic circles as well as within the governments of East Asian countries themselves.

Does President Obama ever discuss the sneak attack on Pearl Harbor while he’s in Japan? Thousands of American lives lost. #MDW

This is not the first time that Trump has decided to insert himself into the geopolitics of East Asia by showing a willingness to criticism the allies of the United States in the region.  Earlier this year, Trump had heavy criticism for both Japan and South Korea, claiming they weren’t pulling their weight when it comes to regional security, and suggesting that US troops be pulled from the region so as to be replaced by a nuclear arsenal in both countries. His stated objective in pursuing this policy is to force both countries to play a more active role in deterring military aggression from North Korea, stating that “South Korea is a money machine but they pay us [the United States] peanuts” and that Japan is “better if it protects itself” against the threat of nuclear attack.

Trump’s War of Words with China

THIS CALL FOR a withdrawal of US troops if regional allies won’t foot a large part of the defense bill is at direct odds with the platform directly stated by the Trump campaign on their website, which is to “[bolster] the US military presence in the East and South China Seas to discourage Chinese adventurism.” Trump has repeatedly taken on the role of an invigorated basher of the PRC during this election cycle, going as far as to declare that the US government was letting China “rape our country” at a campaign rally in Indiana. Consistent with his repeated professions of anti-immigrant sentiment at various points during this election cycle, Trump also frequently infuses a racial element to this criticism, at one point appearing before a crowd of supporters and using stereotypically broken English to mock Chinese and Japanese businessmen.

Additionally, Trump has repeatedly promised stricter regulation on trade with China, labeling the Chinese government as being an unfair currency manipulator and promising to raise taxes on goods imported to the United States from the country. The inconsistency could not be more prominent, as recent investigations uncovered that much of the apparel produced by his mens formal wear clothing brand actually originates from factories in China.

Chinese state-owned media has not taken a liking to Trump’s racially-charged comments on the campaign trail, an issue in which it has taken an even keener interest since the Peter Liang trial earlier this year in which a Chinese-American NYPD officer was accused of manslaughter in the death of Akai Gurley, an African-American man. Though Liang was later given what was considered a light sentence by many, the Chinese media took it as a chance to point out what they considered the scapegoating of an officer of Chinese heritage in a situation where a white officer would most likely have not been charged at all, and offered a rebuke of the US’s own criticisms of the Chinese handling of internal ethnic conflicts. In March of this year, state-owned media outlet Global Times pointed to Trump as a big-mouthed clown looking to stir up racist sentiments amongst his supporters, and warned the United States to “watch itself for not being a source of destructive forces against world peace.”

Sowing Further Discord in Japan and the Korean Peninsula

DESPITE HIS professed enmity with the Chinese government and his desire to contain Chinese aggression in the East and South China Seas, Trump also seems willing to brazenly criticize the US’s closest regional allies and pursue policies that would lead to even higher regional insecurity. Trump’s proposal to withdraw US military presence from Japan was met with such strong negative sentiment in Tokyo that it prompted Prime Minister Shinzo Abe to respond directly, stating that regardless of whoever wins the US presidential elections in November, “the Japan-US alliance is cornerstone of Japan’s diplomacy.” In terms of defense, Japan has been resolutely committed to being a non-nuclear power since the end of the Second World War, and maintains no formal military of its own apart from its Self Defense Force which, though having expanded its mandate in recent years under the nationalistically-minded Abe administration, still engages mostly in humanitarian missions abroad.

On the issue of South Korea arming itself with nuclear weapons, Trump’s bravado reaches the level of dangerous irresponsibility. At the moment, North Korea’s nuclear arsenal, though not insignificant, does not consistent an imminent threat to global peace, and the North Korean regime, under careful watch by the international community (including its main benefactor, the Chinese government), does not seem to be on the verge of first strike against the South. Were Seoul to acquire nuclear weapons with the aid of the United States, however, this delicate balance of hard power and diplomacy would fundamentally shift. The results could be dire for the entire region, as it would not only lend credibility to the North Koreans in their attempt to further enhance their nuclear program. It would likely also set off panic in Beijing and could lead to an escalation of hostilities that might culminate in armed conflict if irritated by the dangerous factor of a rogue US presidency.

Indeed, Trump’s views on North Korea verge into the realm of the absurd: He stated at an Iowan campaign rally in January that he “had to give him [Kim Jong-un] credit” for the way he has governed the dictatorial regime since his father’s death in 2011. Fears of mounting tensions on the peninsula in the event of a Trump presidency are not without basis given this willingness to praise a regime that actively presides over one of the worst humanitarian crises in modern history as well as a readiness to call for the ending of security ties with the South and a further proliferation of nuclear weapons in the region. This seems to further lend impetus to the Kim regime and its declared intentions to launch an attack against South Korea: an editorial in Korean state-run media lauded Trump as a wise leader and praised him for his calls to withdraw US military presence from the southern portion of the peninsula.

Trends in foreign policy sentiments amongst the American public have been leaning towards isolationism over the years of the past administration; publicly posing the possibility of a US troop withdrawal from the Asia Pacific sits well with those voters the Trump campaign seeks to reach. In truth, it is not without merit to discuss the possibility of withdrawal of US military forces from the region given the long-held accusations against it as an example of modern day colonialism; in fact, it would do much to bring an end to a legacy of American imperialistic behavior in this area of the world. However, Donald Trump’s erratic declarations of further nuclear armament of the region and his incoherent policies towards the individual countries currently engaged in conflict with one another have already damaged the region’s stability, and could further increase tensions that might lead to threatening repercussions for the Asia Pacific in the event of a Trump administration.