A RECENT EDITORIAL in Chinese state-run media outlet Xinhua News has provoked much backlash after referring to recently sworn-in Taiwanese president Tsai Ing-Wen as “emotional, personalized, and extreme” because Tsai has no spouse nor any children. As the editorial phrased it, “As a single female politician, [Tsai] has no emotional encumbrances of love, no family restraint, no children to worry about.” As such, Tsai is focused upon “extreme short-term goals” as a politician, with little consideration of long-term effects, and her “political style and tactics are often emotional, personalized, and extreme.”

The editorial has since been deleted, though the cached version can still be read. Sexist attitudes from the Chinese state are nothing new, with state-run campaigns seeking to propagate a negative view of single, unmarried women—termed “leftover women”—from organizations as the state-run All-China Women’s Federation, which in 2011 published the controversial article “Leftover Women Do Not Deserve Our Sympathy”. 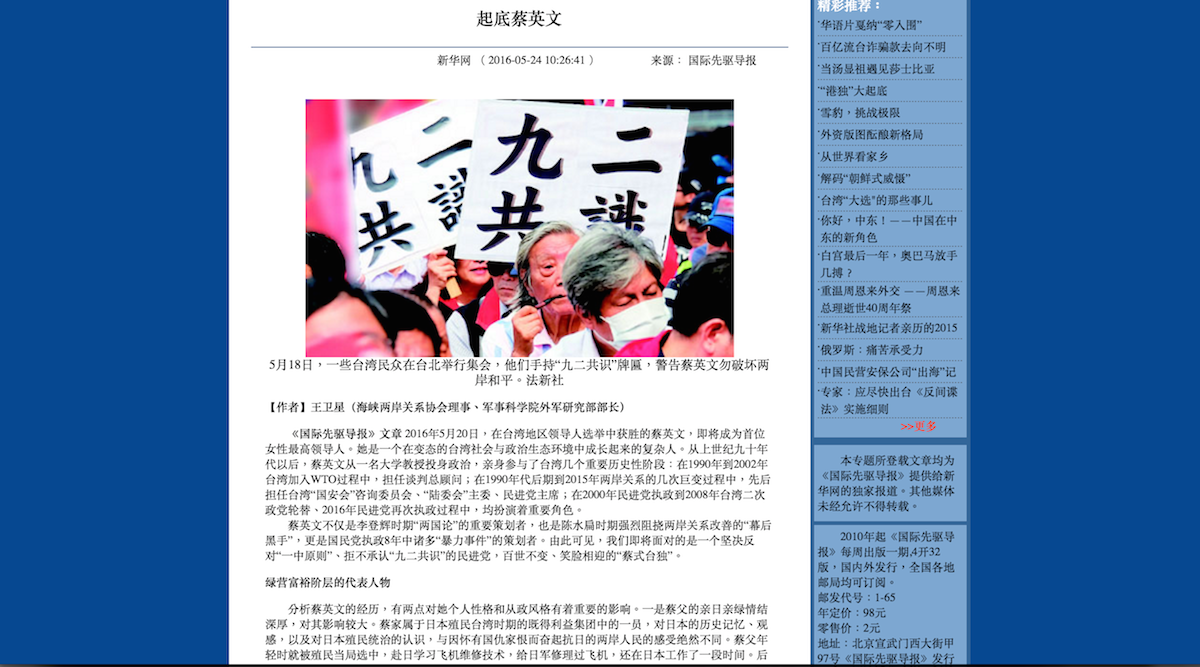 The Xinhua editorial in question

The Chinese state’s campaigns against single women in China are aimed at raising the declining birthrate in China, but recent years have seen backlash against this, as seen in a recent SK-II ad pushing against negative connotations of being single. Likely, this ad and that SK-II would take the calculated risk of airing it reflects that it is now a safe political position to push back against the negative view of single women which the Chinese state attempts to propagate. Hence the deletion of the editorial after outrage not just in Taiwan, but also in China.

But actually, it is that the Xinhua editorial against Tsai only reveals the difference in political systems in Taiwan and China. In spite of contemporary nostalgia for the greater gender equality which existed during the Mao period by Chinese New Leftists and neo-Maoists in the present—with the popular slogan that “women hold up half the sky” and the view that gender inequality in China returned after the free market reforms of the Deng period—at no point in the history of the Chinese party-state have women held high-ranking positions in the Standing Committee of the Politburo or other such government bodies. Much less that, if Tsai Ing-Wen is the first female president of Taiwan, China would have a female president anytime in the foreseeable future.

PARSING BETWEEN the lines, with the claim that as a female politician Tsai would be emotional to the extreme and think little of long-term planning, Xinhua’s editorial actually attempts to claim Tsai may be a dangerous, extremist warmonger as president of Taiwan. Xinhua likely seeks to claim that Tsai would be a dangerous and irrational pro-independence warmonger in the mold of how her predecessor as DPP president of Taiwan, Chen Shui-Bian, is sometimes seen. Thus, Xinhua attempts to claim that Tsai would be “extreme” in her actions as president of Taiwan, though the editorial then makes the bizarre leap to attribute this to Tsai being a woman. In this respect, however, the editorial is inconsistent in its characterization of Tsai, suggesting that she would be more dangerous than Chen because of her lack of a family and her irrationality as a result, but also the suggestion that Tsai would be overly emotional, as a woman.

Probably Xinhua will keep up its attempts to depict Tsai as a dangerous warmonger in other forms, this time having overreached. The editorial also lashed out at Tsai’s father for fixing airplanes for the Japanese during Taiwan’s Japanese colonial period, accuses Tsai of being an advocate of Taiwanese independence, and labels the 2014 Sunflower Movement and 2015 Ministry of Education occupation to be acts of violence orchestrated by Tsai behind the scenes. One suspects that had this odd foray into sexism not been part of the editorial, few would have blinked. Such views are not exactly being new from China.

As such, during past elections we saw criticisms of Tsai and Hung Hsiu-Chu—then two female politicians in competition for the presidency—for both being single and without families of their own. A campaign ad by James Soong of the People First Party, for example, featured the slogan “How can two single women possibly understand the needs of a family?”. The ad suggested that Taiwan’s next president need to conform to the heteronormative, nuclear family—and that this is apparently of vital importance to the proper governance of Taiwan. We see similar sentiments in disgraced DPP chairman Shih Ming-De’s accusations of  Tsai  being a closeted lesbian which made her unfit for the presidency: “[Tsai] needs to be true to herself, her body, in order to be true to her beliefs and her country.” The attempt was made to claim that the sexual life of a presidential candidate has some connection to that individual’s ability to govern as president.

We see something similar in other nation-states, as well. In America, for example, this is the emphasis on family values by Republicans, where this moral order of the nation-state and the family is thought of in terms of Christianity, hence the frenetic emphasis by Republicans and the political Right on policing gender and sexual norms that they see as breaking down in the present. Criticisms as those made against Tsai or other female politicians in Taiwan are largely typical regarding the treatment of female politicians; indeed, in America, this can be observed in the backlash against female politicians in recent years whenever it looked as though a female politician might take a high political office. This is what Xinhua’s editorial—in negative fashion—points to.