The Taipei Pride Parade: Not Yet a ‘Gay Utopia’?

THE GAY PRIDE parade which is held yearly in Taipei took place this past Saturday, as has been the case every year since 2003. But this year may be an especially significant occasion, given that DPP presidential candidate took the occasion to express support for the legalization of gay marriage. Tsai had been hinting at that she would express support for gay marriage for some time, as telegraphed through the prominence of the word “equality” as a campaign slogan and rainbow iconography in her advertising, and the rainbow colored display which was shown at the opening ceremony for DPP campaign headquarters. However, coming out into the open with her stance would be a significant policy move for Tsai nonetheless. Promotional cards for Tsai’s campaign, foreshadowing her eventual declaration of support for gay marriage. The cards were designed by Aaron Nieh, who was the designer of Sunflower Movement website Democracy at 4 AM and Tsai Ing-Wen’s campaign website. Photo credit: 蔡英文競選辦公室

We might note further that the past year has seen the emergence of high profile, openly gay politicians, though more often candidates of third parties. Social Democratic Party politicians Miao Poya and Jennifer Lu are openly gay, Lu’s recent marriage having been a widely celebrated event within Taiwanese civil society given Lu’s longtime history of activism and membership in well-known LGBTQ advocacy group Tongzhi Hotline. Both Miao and Lu were present at the pride parade this Saturday along with their supporters.

Indeed, Taiwanese civil society is generally supportive of gay marriage. Thus, Saturday’s pride parade featured many participants from civil society, activist groups, and third parties. Perhaps unsurprisingly, the presence of the Social Democratic Party was strong and prominent members of the New Power Party and their supporters were also present, roughly following the pattern we have seen in recent rallies in support of gay marriage going back to this summer. 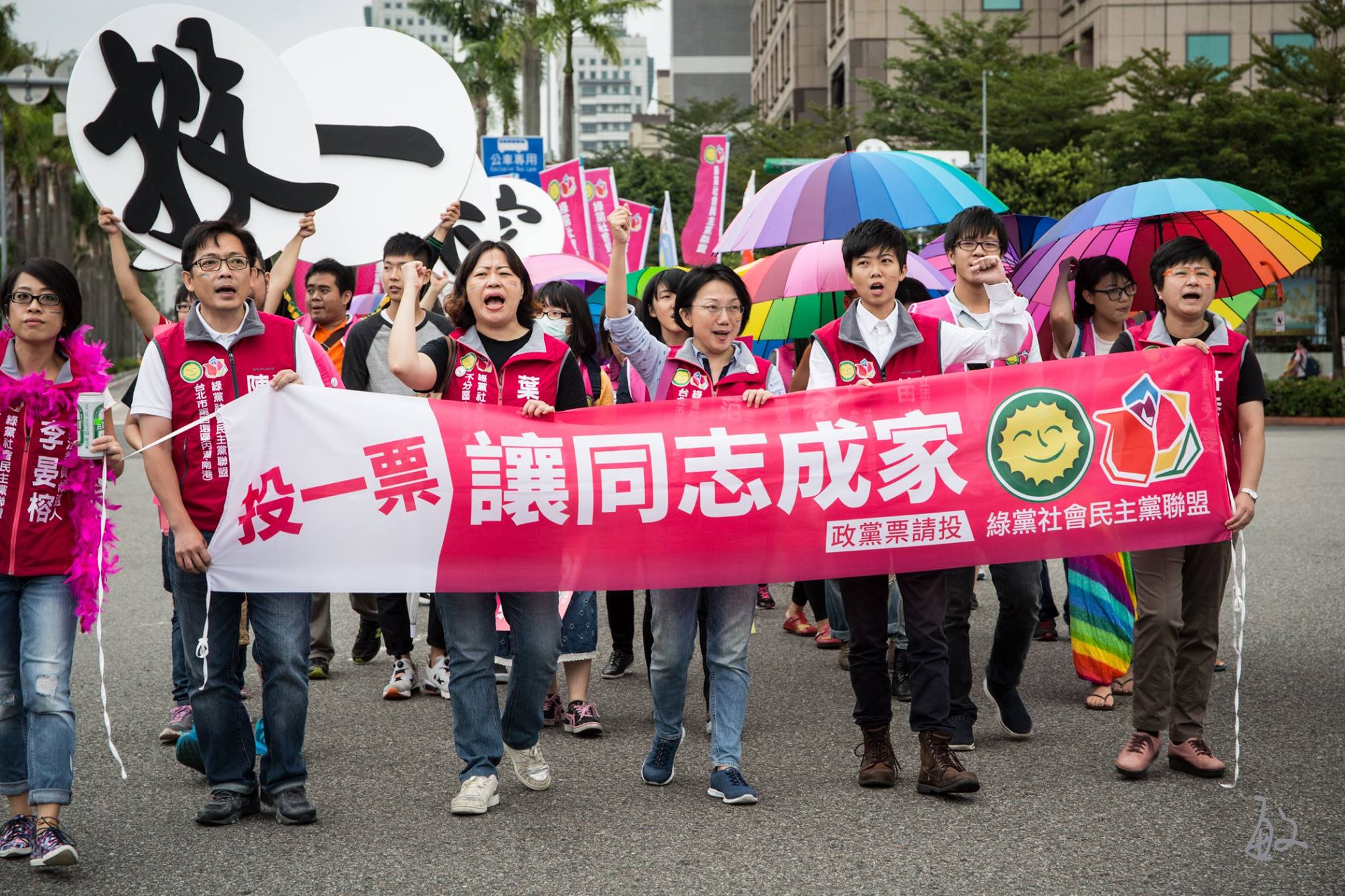 Miao Poya (second from the right behind the banner) and other members of the Social Democratic Party/Green Party Alliance. Photo credit: Minmin

On the other side of the political spectrum, Eric Chu, presidential candidate of the KMT, would state that he supported the individual freedoms of LGBTQ individuals but that more discussion was needed on the issue. This largely follows the stance of his predecessor, Ma Ying-Jeou, who said similar non-statements about gay marriage attempting to avoid the issue—being far from supporting gay marriage, but not wanting to come down decidedly against it in a polarizing way either.

Actually, it is that the DPP is divided about the issue of gay marriage—hence why Tsai’s strong stance in support of gay marriage is surprising, in making it into a signature aspect of her campaign. The DPP would nonetheless make a showing in numbers at Saturday’s pride parade. However, the presence of far-right Christian groups within KMT supporters would have led elements of the party to express strong opposition to the legalization of gay marriage, including several rallies to defend the sanctity of marriage which took place in the last years. 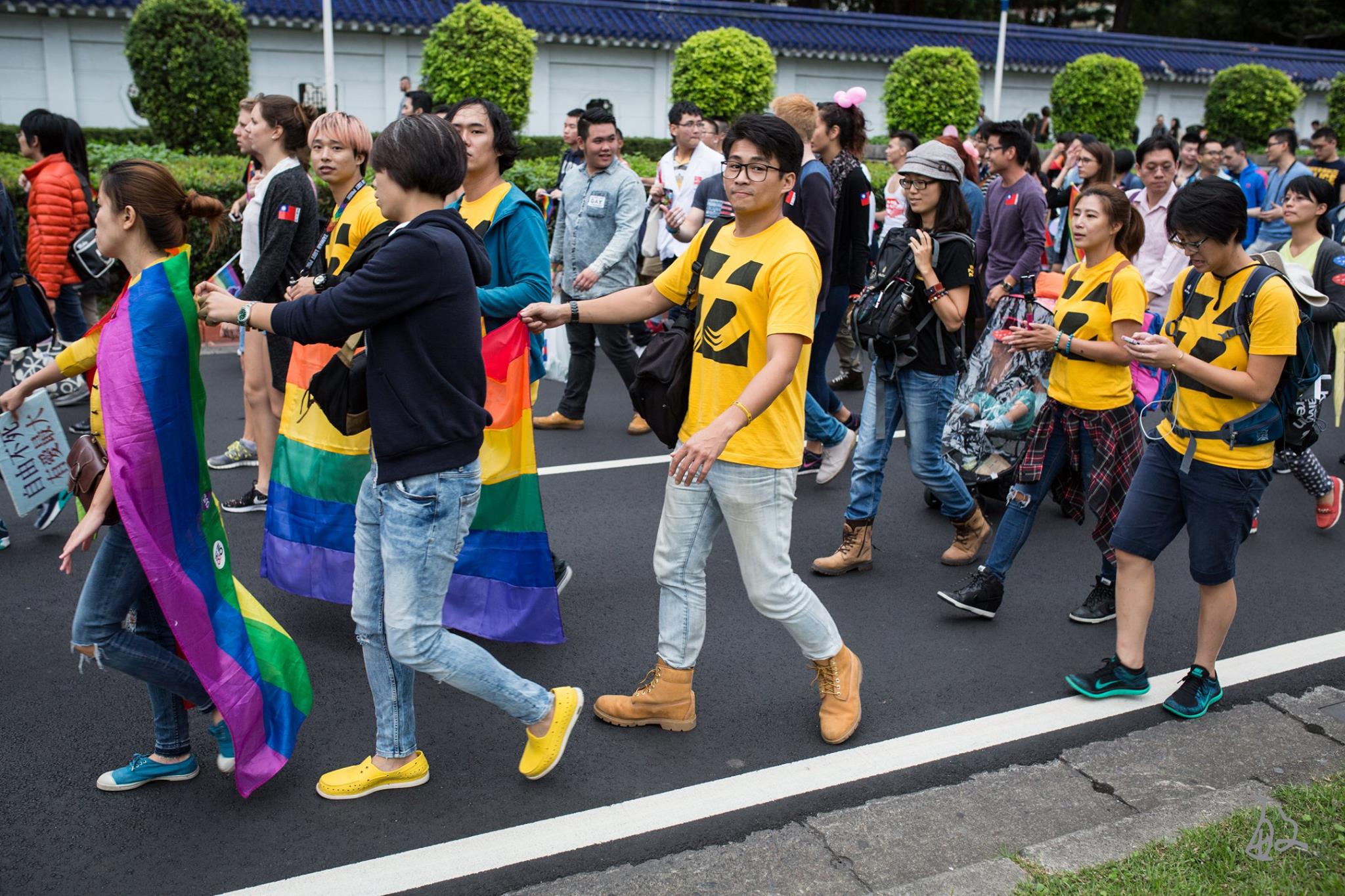 Members of the New Power Party at the pride parade. Photo credit: Minmin

Nevertheless, if it is that Taiwan is often thought of as a “gay utopia” relative to other East Asian countries, it is often because Taiwan was earlier than other East Asian countries in organizing pride activities. Along such lines, an example often is the highly publicized Buddhist marriage between a leading figure of Tongzhi Hotline and her partner which took place in 2012. But however much Taiwan is touted as more liberal about gay rights relative to other Asian countries, in truth it is that Taiwan is still the site of much patriarchal discourse. We might point to how Tsai Ing-Wen of the DPP is still regularly accused of being a closeted lesbian, for example, by disgraced former DPP chairman Shih Ming-De and others as a means of claiming that Tsai is unqualified to become president of Taiwan. Or that Tsai and then-KMT presidential candidate Hung would come under attack as unmarried women without children running for president.

Reportedly, it was Taiwan’s 2003 pride parade which would be a contributing factor in Hong Kong’s holding its first pride parade. As an annual event, Taiwan’s pride parade is widely reported on internationally and has no doubt been a contributing factor to why Taiwan has come to be known as liberal on LGBTQ issues relative to other Asian countries. Taiwan is also known for its exportation of tongzhi (LGBTQ) literature to other Sinophone countries and territories. Actually, this year’s ILGA-Asia Regional Conference was held in the preceding days to the pride parade, from October 28th to October 30th. The conference is Asia’s largest LGBTQ conference, although this has also prompted remarks about how it is ironic that the conference was held this year in Taiwan although Taiwan is not acknowledged as a country by most of the world.

The past year has seen changes, for example, the mass marriage ceremony which is organized yearly by the Taipei city government, saw the participation of ten gay couples this year. The wedding was presided over by Taipei mayor Ko Wen-Je, who had previously stated that he would consider changing his stance on gay marriage after half of the states in the US recognized same-sex marriages. Seeing as same-sex marriage quite suddenly became legal in the US this past year, surprising even longtime observers, perhaps this was a motivating factor in Taipei city government allowing the participation of gay couples this time around—although, of course, gay couples are still not actually allowed to legally marry and this was more symbolic than anything.

Going forward, we will see as to what the next steps of the movement for gay marriage are. Debate continues, however, regarding the role of marriage, with those taking the stance that queer activists should instead call for the abolition of marriage as an institute of oppression. This is a debate which, of course, we have seen in other countries where the legalization of gay marriage has become a very real possibility, and a debate which we have seen within queer activist circles in Taiwan before. Along such lines, the pride parade has also seen criticism for excluding issues of class or social justice for marginalized groups as unrelated to what is seen as the main issue at hand. This has also been a criticism leveled against the pride parade in past years and this year was no exception, in which the pride parade is seen as focused upon presenting a sanitized vision of queerness for popular consumption. Regardless, however, it is clear that the picture is hardly as rosy as the vision of Taiwan as a “gay utopia” would present it as being. The role of patriarchal discourse in political life remains quite prominent and, whether through the legalization of gay marriage or otherwise, it remains for debates to be had about what sexual liberation would mean for Taiwan and the world.