What the Sunflower Movement unveiled for Taiwan

Jasmine Chan was born and bred in Taiwan, and one of the occupiers who stayed in the Legislative Yuan from the first night until the very last night of the occupation.

This is the first in an upcoming series of articles describing her experiences within the occupation.

ON THE NIGHT OF March 18th 2014, a number of Taiwanese young people rushed into the Legislative Yuan, and began an occupation of the legislative chamber that lasted over 20 days in protest of the Cross-Strait Agreement on Trade in Services (CSSTA) which had been passed by legislators without detailed examination. This occupation called Sunflower Movement breaks through the darkness of Taiwan democracy, and stimulates Taiwanese people originally indifferent to politics, to face this danger to democracy. Consequently, it brought to bear large-scale civic participation. At the same time, the Sunflower Movement unveiled the long-existing dilemmas in many aspects of Taiwan, including political, economic and social problems under the surface.

The Crisis of Taiwan Democracy

WHY EXACTLY WAS the Ma government allowed to enforce the Cross-Strait Agreement on Trade in Services despite the people’s strong opposition ? The answer demonstrates the constitutional crisis in Taiwanese democracy. In particular, the design of Taiwanese political system has major disadvantages when it comes to separation of powers. Taiwan has neither a cabinet system nor presidential system. The President can directly appoint the officials of Executive Yuan without any approval from Legislative Yuan. Thus, the legislative power as the representative of the people cannot balance against the executive power owned by government. As a result, though the level of popular support of the Ma government has dropped below 9%, he can still carry on his policies with high self-confidence, and ignore the people’s outrage. The front gate of the courtyard to the Legislative Yuan while under occupation. Photo credit: Lorand Laskai

Besides, because of the invalid operation of political parties in Taiwan, the legislators often lack the ability to realize what their supporters truly want. If the legislators don’t follow the mutual directions decided by inner negotiations of their party, they would receive strict punishments. Furthermore, the KMT, as the majority party in the Legislative Yuan, generated a rule in 2013 at Ma’s behest which stipulates that the president must take the chief position in KMT party. As a result, the President is able to exercise executive power of government while also controlling legislative power through manipulation . Unquestionably, the Ma government turned into a leviathan grabbing uncontrollably strong power.

Taiwanese Citizens Are Cold to Politics

STILL THE QUESTION REMAINS, how did this ridiculous political mess come about in Taiwan? The main reason is that the Taiwanese people are indifferent to politics. The aftereffects of martial laws and white terror in the past still has not disappeared, and it causes older people to still be afraid of being persecuted in the name of interfering in politics.

On the other hand, the politicians have fabricated the impressions of a political disorder which was viewed as unreasonable opposition between the KMT-DPP, and accordingly people became tired of the political fights. Though politicians in Taiwan are more or less viewed as generally disreputable, contradictorily, people still often believe that politicians are more able to determine the public issues than normal citizens. As a consequence, politicians and so-called elites and experts on politics are given extreme freedom without people’s supervision. 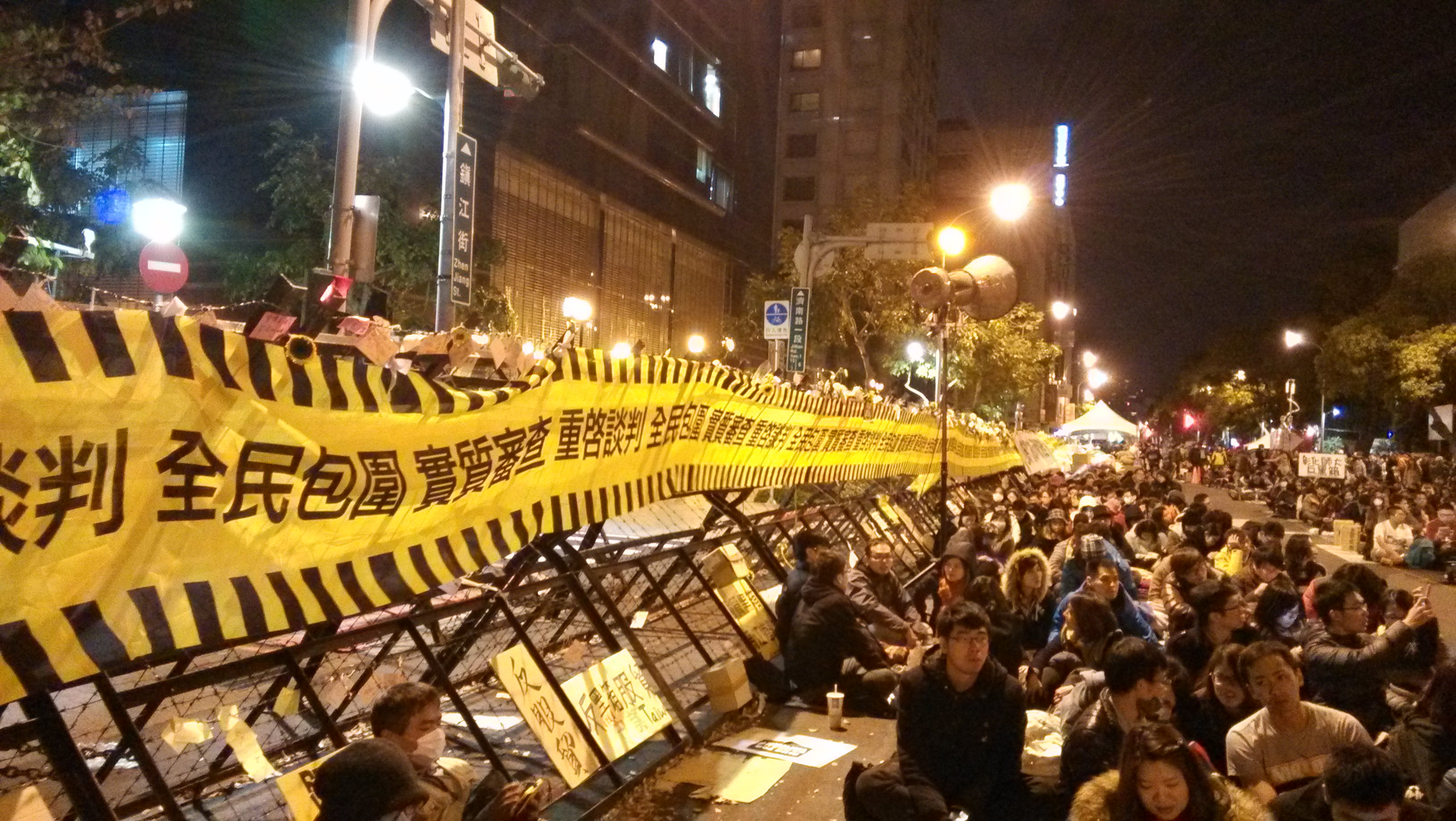 Capitalism also makes Taiwan people become distant from politics, because they are preoccupied with pursuing material lives. Some indulged in “little and certain pleasures”, and enjoy dream-like, over-beautified lives, while others are struggling to make ends meet. People lack incentives to take care of public issues in these lifestyles. Of course, when people don’t keep an eye on politics, politicians start to go out of control.

The Entrance of Chinese Power Into Taiwan Through Economics

THE RATIFICATION PROCESS OF the Cross-Strait Agreement on Trade in Services not only displayed the fact that Taiwan democracy is under threat, but also demonstrated China’s interference in Taiwan. Also, we can see the attitudes of KMT towards China in this issue, and how globalization has come to dominate Taiwan.

The scales and structures of business are totally different between Taiwan and China. If we just accept the trade without detailed consideration, China is likely take control over Taiwan by means of financial interactions, and it will lead to what Hong Kong is facing now. Then why does the KMT proposes to open Taiwan markets? Looking back the history, we can observe that the KMT has emphasized the mutual connection between Taiwan and China for such a long time, and continually oppressed the subjectivity and independence of Taiwan politics and culture.

AS A PRODUCT OF GLOBALIZATION, the CSSTA trade bill sparked much controversy but in fact Taiwan people probably do not, in fact, understand the meaning of globalization for Taiwan. Over the past several decades, capitalism and globalization have widened the inequality of wealth all over the world, Taiwan included. Based on the statistics in 2014, the income of the rich 5% is over one hundred times than the least 5%; the inequality is so incredible that the government was not willing to announce the result. Nonetheless, Taiwan people generally tend not to doubt globalization since we lack opportunity to learn about other options. In Taiwanese education, philosophy and Left theories are avoided, so globalization is viewed as a neutral or even positive word; the background assumptions and arguments of globalization are ignored. When people aren’t granted the chance to think freely, they are only left to be unwilling victims of the systems. Hence young people graduating from university only make 22,000NTD ($735) a month, and workers can suddenly be fired by employers outsourcing Taiwanese jobs to other countries.

The Spreading of the Spirit of Democracy

NEOLIBERALISM HAS CAUSED frustrations in many countries around the world. Whether Taiwan still accepts the rules of neoliberalism is a question worth reflecting upon. Furthered interaction between Taiwan and China seems necessary, but how should Taiwan respond? Taiwan people must also watch over the Ma government, and resolve the crisis of constitutional democracy in Taiwan as early as possible.

The Sunflower Movement is just a start. The seeds of expectation for reformations in Taiwan will spread with the wind, and the flowers of democracy will bloom everywhere.